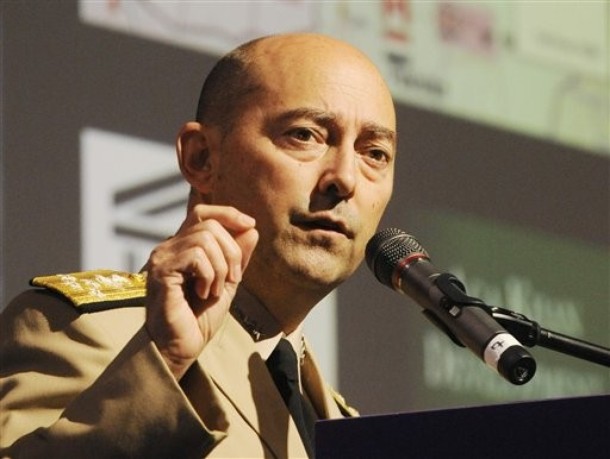 From Sean Palter, the Atlantic Council of Canada:  The current NATO Supreme Allied Commander Europe (SACEUR) logged over 300,000 air miles last year on his way through 40 plus countries. With such a heavy travel load and one of the most difficult jobs in the world, a typical day has no meaning in the Admiral’s vocabulary.

“There is no typical day,” comments [Adm. James] Stavridis, who is also the Commander, US European Command. “I spend a few days a month in my HQ in Mons, a few days in my US HQ in Stuttgart, and the rest of the time on the road, from Washington D.C, to Afghanistan and everywhere in between. …”

Cyber security, one of the issues that Stavridis is working on, is proving to be the emerging issue of the 21st century. Yet many still do not fully understand the capabilities and threats posed by this.

Stavridis admits that NATO has not been sufficiently prepared on this front, but they are working very hard on that now.

“I’m standing up a cyber monitoring and response cell within the NATO command structure and linking to the NATO Centre of Excellence for Cyber Defence in Estonia, as well as to the NATO response cell within the NATO Cyber Response Centre run by the NATO agencies,” the Admiral explains. “We also have to explore private-public linkages, which we just did in a one-day conference at NATO HQ attended by big corporations, academics, military and a wide variety of nations. …”

With so many issues facing NATO, Stavridis has many short term goals that he hopes to see accomplished within the next year.

“Train 300,000 Afghan Security Forces, deepen defence cooperation with Russia, reduce NATO forces in the Balkans to under 5,000, exercise effectively for Article V of the Alliance, put six ships on counter-piracy station throughout the year, stand up effective cyber cooperation between NATO and private sector partners and lay out a good missile defence C2 scheme for Europe.”  (photo: AP)  (via Allied Command Operations)