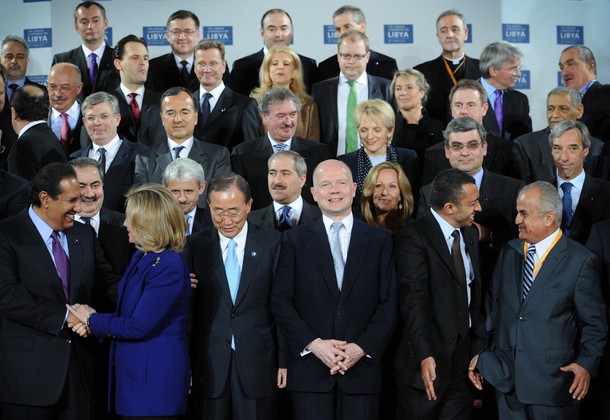 From Meghan O’Sullivan, the Washington Post:  Given the most obvious differences between Iraq and Libya — no ground troops in Libya and no U.N. resolution in Iraq — few will take issue with [President Barack] Obama’s protestation. Yet, Obama’s road in Libya may prove more similar to President George W. Bush’s than it now appears. …

Despite the different circumstances, the Iraq war, and the Afghan war as well, offer hard-won insights about the nature of coalitions, the limits of military force and the power of unintended consequences. Considering them now offers us a chance to avoid repeating past mistakes in Libya, particularly ones that proved so costly to us and the people we were trying to help. …

The political benefits of a coalition (particularly one involving Arab countries) are enormous in an intervention such as the one in Libya. But maintaining a wartime coalition is in­cred­ibly difficult and requires continued American leadership, especially when the operation is managed by NATO. In Afghanistan, even though countries such as Canada, Denmark and Britain have made important contributions to the war effort, the United States remains far and away the dominant force; the “handing off” of Afghanistan to NATO in 2006 arguably proved more style than substance.

The Obama administration has made much of the handover of the Libya mission to NATO oversight. Given that European governments consider Libya more vital to their interests than Afghanistan, a NATO mission in Libya may command more political backing from Europe. However, such support is unlikely to translate into more economic or military resources, simply because European countries are cutting their already modest military and diplomatic budgets, not expanding them.

Quite apart from the question of resources is the issue of alignment. Coalitions are marvelous things as long as all the parties agree on strategy. When members disagree, as the United States and Britain fundamentally did over the approach toward narcotics in Afghanistan, valuable time is lost. In Libya, Obama’s open embrace of regime change — which goes beyond the ambitions expressed by the Arab League and United Nations — probably already sits awkwardly with some U.S. allies.

Meghan O’Sullivan served as deputy national security adviser for Iraq and Afghanistan from 2005 to 2007 and is now a professor of international affairs at Harvard University’s Kennedy School of Government.  (photo: Getty)