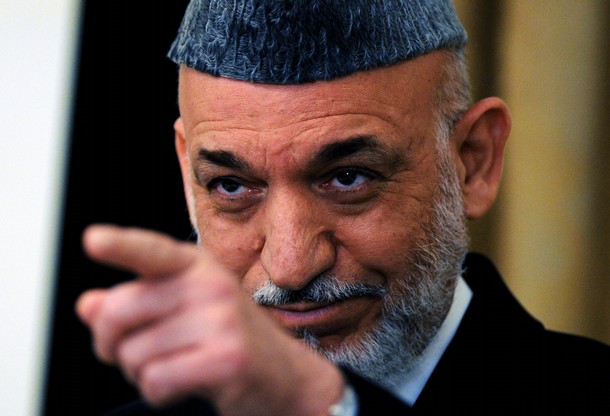 From David Fox, Reuters:  Afghan President Hamid Karzai questioned on Thursday the willingness of his Western allies to strike insurgent bases in Pakistan given the strong evidence of Islamabad’s support for the Taliban.

"The war against terrorism is not in the villages or houses of Afghanistan … but in the sanctuaries, sources of funding and training (of terrorism), and they lie outside Afghanistan," he told a news conference in Kabul.

"It is a different question whether Afghanistan has the ability to tackle this," he said in response to a question about Pakistan support for the Taliban and why the conflict was dragging on. "… but our allies have this capability. The question now is ‘why they are not taking action’?" Islamabad’s covert backing of the Taliban resurfaced this week with the publication by the whistleblower organisation WikiLeaks of tens of thousands of classified U.S. military documents related to the near-nine-year-old war.

The documents show current and former members of Pakistan’s spy agency were actively collaborating with the Taliban in plotting attacks in Afghanistan — including an assassination attempt against Karzai.  (photo: Getty)