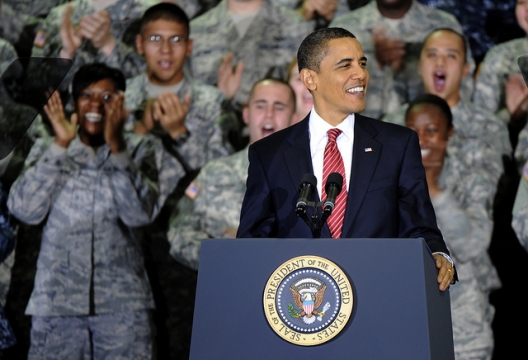 The Obama administration will propose a defense spending increase to levels not seen since 2012 when it sends Congress a $585 billion Pentagon budget request on Monday. …

The budget will include $5.3 billion to continue airstrikes against Islamic State militants in Iraq and Syria, of which $1.3 billion is for training Iraqi Security Forces and moderate Syrian rebels. It also includes a $42.5 billion for U.S. operations in Afghanistan next year – less than the $53.4 appropriated for fiscal 2015 – as the number of American forces is expected to decline below the roughly 10,000 soldiers there today….

Obama will ask for a $534 billion base budget, which would be the largest base budget in history. The Budget Control Act of 2011 caps defense spending next year at $500 billion. Additionally, the president will seek $50.9 billion for the Overseas Contingency Operations, or OCO, war funding account, which is not subject to the caps, also know as sequestration….

The proposal will also look to cut 3,500 civilian positions within the Pentagon’s headquarters staff.