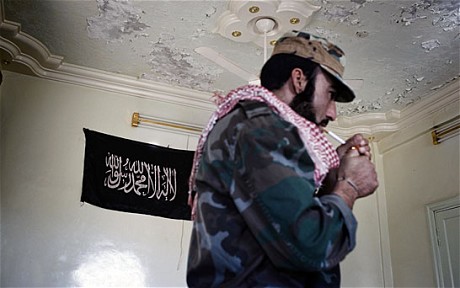 From Ghaith Abdul-Ahad, the Guardian:  Abu Khuder and his men fight for al-Qaida. They call themselves the ghuraba’a, or "strangers", after a famous jihadi poem celebrating Osama bin Laden’s time with his followers in the Afghan mountains , and they are one of a number of jihadi organisations establishing a foothold in the east of the country now that the conflict in Syria has stretched well into its second bloody year.

They try to hide their presence. "Some people are worried about carrying the [black] flags," said Abu Khuder. "They fear America will come and fight us. So we fight in secret. Why give Bashar and the west a pretext?" But their existence is common knowledge in Mohassen. Even passers-by joke with the men about car bombs and IEDs.

According to Abu Khuder, his men are working closely with the military council that commands the Free Syrian Army brigades in the region. "We meet almost every day," he said. "We have clear instructions from our [al-Qaida] leadership that if the FSA need our help we should give it. We help them with IEDs and car bombs. Our main talent is in the bombing operations." Abu Khuder’s men had a lot of experience in bomb-making from Iraq and elsewhere, he added.

Abu Khuder spoke later at length. He reclined on a pile of cushions in a house in Mohassen, resting his left arm which had been hit by a sniper’s bullet and was wrapped in plaster and bandages. Four teenage boys kneeled in a tight crescent in front of him, craning their necks and listening with awe. Other villagers in the room looked uneasy.

Abu Khuder had been an officer in a mechanised Syrian border force called the Camel Corps when he took up arms against the regime. He fought the security forces with a pistol and a light hunting rifle, gaining a reputation as one of the bravest and most ruthless men in Deir el-Zour province and helped to form one of the first FSA battalions.

He soon became disillusioned with what he saw as the rebel army’s disorganisation and inability to strike at the regime, however. He illustrated this by describing an attempt to attack the government garrison in Mohassen. Fortified in a former textile factory behind concrete walls, sand bags, machine-gun turrets and armoured vehicles, the garrison was immune to the rebels’ puny attempt at assault.

"When we attacked the base with the FSA we tried everything and failed," said Abu Khuder. "Even with around 200 men attacking from multiple fronts they couldn’t injure a single government soldier and instead wasted 1.5m Syrian pounds [£14,500] on firing ammunition at the walls."

Then a group of devout and disciplined Islamist fighters in the nearby village offered to help. They summoned an expert from Damascus and after two days of work handed Abu Khuder their token of friendship: a truck rigged with two tonnes of explosives.

Two men drove the truck close to the gate of the base and detonated it remotely. The explosion was so large, Abu Khuder said, that windows and metal shutters were blown hundreds of metres, trees were ripped up by their roots and a huge crater was left in the middle of the road.

The next day the army left and the town of Mohassen was free.

"The car bomb cost us 100,000 Syrian pounds and fewer than 10 people were involved [in the operation]," he said. "Within two days of the bomb expert arriving we had it ready. We didn’t waste a single bullet. . . .

"In the beginning there were very few. Now, mashallah, there are immigrants joining us and bringing their experience," he told the gathered people. "Men from Yemen, Saudi, Iraq and Jordan. Yemenis are the best in their religion and discipline and the Iraqis are the worst in everything – even in religion."  (photo: Alessio Romenzi/Telegraph)