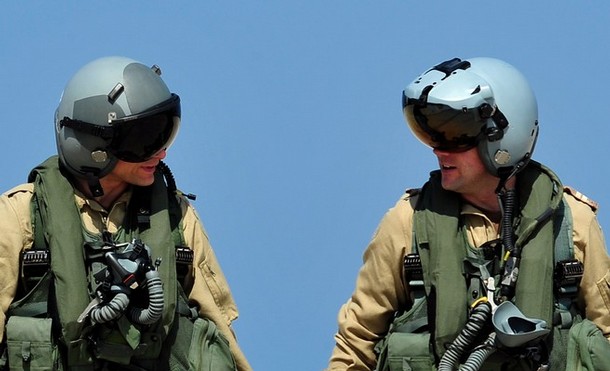 From Philip Ewing, Morning Defense:  “We flew a total of 130 coalition sorties, 49 of which were strike-related, meaning they were designed to hit a designated target. Of those total sorties, roughly half were flown by pilots from partner nations,” he [Adm. Gortney] said. “In fact, nearly all, some 75 percent of the combat air patrol missions in support of the no-fly zone, are now being executed by our coalition partners. On Sunday, that figure was less than 10 percent. …

The skies over Libya are getting crowded these days, Vice Adm. Bill Gortney said Thursday. In a briefing for reporters at the Pentagon, he laid down what a typical mission looks like for the coalition warplanes hitting ground targets and enforcing the no-fly zone, which now stretches from border to border and then south below the city of Sabha.

“The aircraft are launching from many bases around Europe and from the two aircraft carriers [the French Charles du Galle and the Italian Giuseppe Garibaldi] as well as our amphibious ship, the Kearsarge,” Gortney said. “They’ll be refueling on the way there, and then they will take station on the [combat air patrol] stations.

“From there, if they’re in the defensive combat air mission, they’ll stay there waiting tasking from the AWACS aircraft … and probably tank one or two times while they’re on station, always maintaining airplanes. While one CAP station would be tanking, they’ll keep somebody that has enough gas to prosecute to push inland if they’re needed to, and then probably tank on their return home. I would say the missions are on the order of five to six hours in length, depending upon where the airplanes are taking off from.”

All told, that’s a lot of aviation fuel per jet and a lot of time in the air, which means wear on pilots, crews, aircraft and maintainers. More reasons for American commanders to welcome newcomers to the coalition – newcomers such as the United Arab Emirates, which announced Thursday it’s dispatching a dozen fighters to this party.  (photo: Getty)