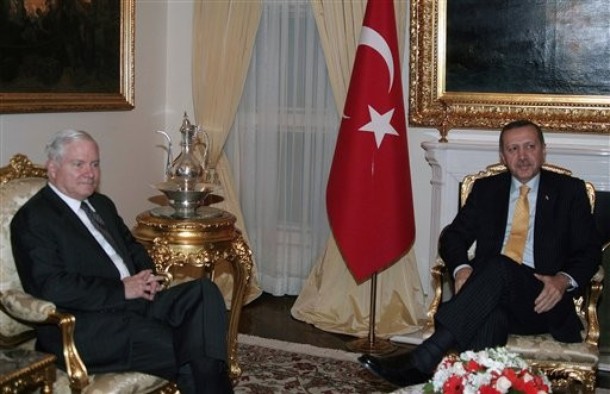 From Zaman:  Turkey, in talks with the United States over a proposed missile defense system, has asked US officials whether non-NATO countries would have access to intelligence that sensors in the shield would gather , sources close to the negotiations have told Today’s Zaman. US authorities, in return, have assuaged Turkish concerns, saying the intelligence will be out of reach for any non-NATO countries, including Israel. …

Many in Turkey believe that protecting Israel from a possible missile attack by Iranians is the secret purpose of the US-pioneered missile defense system. But Israel is not a NATO member and thus cannot receive protection from a NATO system. Israel also does not need protection from NATO as it already has its own national missile defense system that could counter threats from Iran or other possible enemies.

In fact, given the unpredictability of the security situation across the globe, it is possible that the missile defense system could even be used against Israel some day in the future. NATO is an organization that operates on the principle of collective defense and an attack on an ally is considered an attack on the entire alliance.

Relations between former allies Israel and Turkey took a nosedive following an Israeli offensive in Gaza in the winter of 2008-2009, which resulted in death of about 1,400 Palestinians. The tensions peaked when Israeli commandos killed eight Turks and one Turkish-American on an aid ship trying to break the Israeli blockade of Gaza on May 31 and relations have been at a standstill since then.  (photo: AP)  (via Laura Rozen)