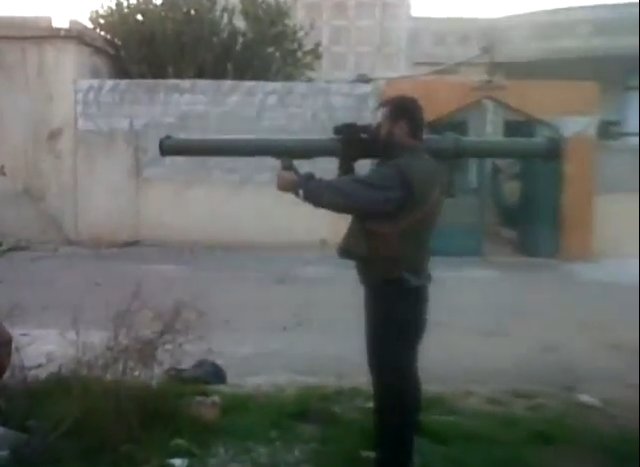 From Michael Weiss, NOW :  In one of the most strangely neglected stories in the two-year Syria conflict, beginning on January 1, four new weapon models began appearing in large quantities in Daraa province, none used at any time by the Syrian military. The M60 recoilless gun, the M79 Osa rocket launcher, the RPG-22 rocket launcher and the Milkor MGL/RGB-6 grenade launcher hadn’t been shown in any opposition videos until the new year. . . .

According to Eliot Higgins, who blogs obsessively about Syrian warfare as “Brown Moses” and who first uncovered the new hardware in Syria, the RPG-22 and M60 have since turned up in Idlib; the RPG-22, M79 and RBG-6 in Hama; the RPG-22 and M79 in Aleppo; and all four have appeared in Damascus. In an email, Higgins said that markings from M79 rocket pods suggest a manufacture date of 1990-1991, although the rocket launcher itself was first manufactured in 1979. Yet clearly this is still an improvement on the more commonly used RPG-7. . . .

That sophisticated anti-tank and anti-infantry munitions are now being funneled exclusively to non-extremist rebel units, who themselves are committed to isolating al-Qaeda, suggests either a staggering coincidence or some degree of external facilitation. Now here’s another interesting fact. The M60, the M79, the RBG-6 and the RPG-22 are all currently in use by the Croatian Army.

Croatia, which, along with a host of European and Middle Eastern powers, recognized the Syrian National Coalition as the sole legitimate representative of the Syrian people, is not yet a member state of the European Union (it is set to accede in July of this year) and so, technically, it is not beholden to the EU arms embargo. It is, however, a member of the Friends of Syria umbrella group: Croatian Foreign Minister Vesna Pusić attended the second conference in Istanbul in 2012, and she’s previously expressed concern about Croatia’s oil and gas fields, which sanctions and deteriorating security have rendered useless. (About a year ago, Croatia instructed all of its businesses to withdraw from Syria, an act that left INA, the national oil company, operating at a loss of “hundreds of millions of euros.”)  A pro-EU Balkan state not yet subject to EU jurisdiction would also have a nice geopolitical motive to help undermine a proxy of Russia.

But even assuming that Zagreb isn’t directly or indirectly supplying these arms to Syria, might a hitherto unknown arms dealer – Croatian or otherwise, state or non-state – now be working directly with a regional intermediary who is supplying them? If so, how is it that this arms dealer has managed to negotiate relatively smooth supply routes through both Jordan and Turkey?

One plausible scenario would be that these weapons were all coming from Libya, which was one of the initial arms-runners to the Syrian opposition. The former Yugoslavia, which manufactured the M60 and M79, formerly enjoyed warm ties with Muammar Qaddafi, as did Croatia prior to the Libyan revolt and subsequent NATO intervention (former Croatian President Stipe Mesić seemed to want those ties to continue regardless).

So it is possible that the M60s, M79s, RPG-22s and RBG-6s were all sold to Libya a long time ago and were only just emptied from warehouses by the National Transition Council for urgent use in another country – although this then raises the question of why it took the new Libyan government a year to send the heavy-duty materiel to the Syrians when it previously trafficked in only light arms and ammunition. Nor does this explain why the NTC suddenly decided to empower the moderates over the jihadists in a highly organized fashion that, superficially, accords with Western preconditions for supporting the armed opposition.

From Liz Sly and Karen DeYoung, Washington Post:  A surge of rebel advances in Syria is being fueled at least in part by an influx of heavy weaponry in a renewed effort by outside powers to arm moderates in the Free Syrian Army, according to Arab and rebel officials.

The new armaments, including anti-tank weapons and recoilless rifles, have been sent across the Jordanian border into the province of Daraa in recent weeks to counter the growing influence of Islamist extremist groups in the north of Syria by boosting more moderate groups fighting in the south, the officials say.

The arms are the first heavy weapons known to have been supplied by outside powers to the rebels battling to topple President Bashar al-Assad and his family’s four-decade-old regime since the Syrian uprising began two years ago.

The officials declined to identify the source of the newly provided weapons, but they noted that the countries most closely involved in supporting the rebels’ campaign to oust Assad have grown increasingly alarmed at the soaring influence of Islamists over the fragmented rebel movement. They include the United States and its major European allies, along with Turkey and the United Arab Emirates, and Saudi Arabia and Qatar, the two countries most directly involved in supplying the rebels. Security officials from those nations have formed a security coordination committee that consults regularly on events in Syria, they said.

Although the Obama administration continues to refuse to directly arm the rebels, the administration has provided intelligence assistance to those who are involved in the supplies, and it also helps vet opposition forces. U.S. officials declined to comment on the new armaments.

The goal of these renewed deliveries, Arab and rebel officials said, is to reverse the unintended effect of an effort last summer to supply small arms and ammunition to rebel forces in the north, which was halted after it became clear that radical Islamists were emerging as the chief beneficiaries.

“The idea was to get heavier stuff, intensify supply and make sure it goes to the good guys,” said an Arab official who spoke on the condition of anonymity because of the sensitivity of the operation. “If you want to weaken al-Nusra, you do it not by withholding [weapons] but by boosting the other groups.”

Louay al-Mokdad, the political and media coordinator for the Free Syrian Army, confirmed that the rebels have procured new weapons donated from outside Syria, rather than bought on the black market or seized during the capture of government facilities, the source of the vast majority of the arms that are in the hands of the rebels. But he declined to say who was behind the effort.  (photo: militaryphotos.net)