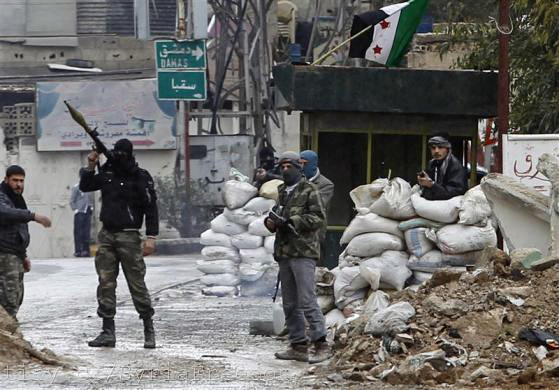 From Walter Russell Mead, Via Meadia:  The worst case for the United States in a post-Assad Syria would be that groups linked to al-Qaeda become dominant players either in the country’s government as a whole or in control of significant regions in a country that fragments. Such groups would be nests of terrorists acting to destabilize not only Syria itself but Iraq, Lebanon, and the wider Middle East. They would certainly be active in Russia and, through extensive ties with the Arab diaspora in Europe, add considerably to the security headaches the West faces. They would be actively working to destabilize governments across the Arab world as well and providing shelter, training, and arms to terrorists from all over. In a worst, worst case scenario, they get hold of Assad’s WMD stockpiles and start passing them out to their friends.

The United States does not want any of this to happen. We could not long stand idly by if it did.

Aiding the less ugly, less bad guys in the Syrian resistance, and even finding a few actual good guys to support, isn’t about installing a pro-American government in post civil war Syria. It’s about minimizing the prospects for a worst-case scenario—by shortening the era of conflict and so, hopefully, reducing the radicalization of the population and limiting the prospects that Syrian society as a whole will descend into all-out chaotic massacres and civil conflict. And it’s about making sure that other people in Syria, unsavory on other grounds as they may be, who don’t like al-Qaeda type groups and don’t want them to establish a permanent presence in the country, have enough guns and ammunition to get their way.

This is not a plan to edge the United States toward military engagement in Syria; it is aimed at reducing the chance that American forces will need to get involved. And, by accelerating the overthrow of Assad, it’s also a strategy for putting more pressure on Iran, pressure that represents our best hope of avoiding war with the mullahs as well. The whole point here is to keep our troops at home. . . .

The situation in Syria now isn’t about doing good or preventing bloodbaths. The bloodbath is here and there is not a lot of good that can be done within the range of our capacity and will. This is now all about trying to prevent the worst rather than promoting the best. It means arming people, many of whom we don’t like and who don’t like us, to reduce the likelihood of a dangerous increase in the power of people who consider themselves at war with us and our friends.  (photo: Freedom House)  (via (Real Clear Media)