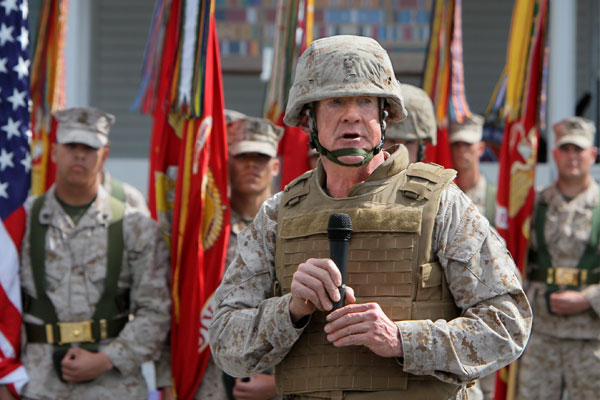 For its part, the Army  has fielded the Cyber Effects Request Format, or CERF, a system tht allows combatant commands to request cyber operations from U.S. Cyber Command.

"It’s an Air Force model that we deliberately seized on about 19 months ago, a close air support model, to develop a process and procedures by which tactical and operational commanders can leverage these fires in support of their operations," said Lt. Col. Jason Bender, chief of fires for Army Cyber Command on August 15. ("Fires" is the military term for discharging weapons. So no, Bender isn’t in charge of burning things for Army Cyber. . . .)

Right now, the CERF allows combatant commanders and operational commanders to request cyber support for their missions. However, the Army would like to expand this so that smaller, tactical level units fighting on the ground can request cyber fire support.

"Just about all the services would like to be able to [provide cyber fire support to tactical level troops], the question right now is, what is a cyber tactical fire," said Bender during a Sept. 7 interview. "Most of the fires that we’re doing are at the operational or strategic level of war." Since cyber operations don’t have physical boundaries, limiting the effects of cyber fires "to a small tactical area is pretty difficult right now. . . ."

"The future environment . . . leads us not only to focus on [cyber] vulnerabilities [and opportunities] at the strategic levels, but to create options for the most forward, tactical commanders to use cyber as an important weapon within their quiver," the Marines’ top cyber warrior, Lt. Gen. Richard Mills, said on Aug. 15.

"That MAGTF commander at the front end of the spear will have organic, offensive [cyber] capabilities, they will be augmented by fires from [Marine Corps Cyber Command] and from U.S. Cyber Command and, perhaps ultimately, from NSA," added Mills, referring to the National Security Agency, considered one of the most potent cyber fighting organizations in the world.

Mills admitted that his forces used offensive cyber operations to "great impact" in Afghanistan when he commanded all Marines there in 2010.

"I was able to get inside [enemy networks], and affect his command and control and, in fact, defend myself against his almost constant incursions to get inside my [cyber] wire to effect my operations," Mills said on Aug. 15.  (photo: Heritage)