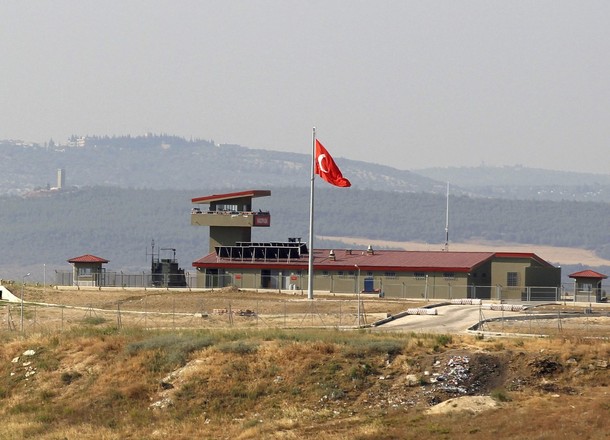 Regional analysts said that while neither Turkey nor its NATO allies appeared to have any appetite to enforce a formal no-fly zone over Syrian territory, Prime Minister Tayyip Erdogan had made it clear Assad would be risking what he called the ‘wrath’ of Turkey if its aircraft strayed close to its borders. . . .

Rebel sources in Turkey’s Hatay region said Assad’s helicopters attacked Saraqeb, a strategic town deep in Idlib province, but kept away from the area directly along the Turkish border in the rural regions of Idlib and Aleppo provinces. . . .

Ankara, which has the second biggest army in NATO, called an emergency NATO meeting after its warplane was shot down.

Turkey has in the past talked about creating a humanitarian corridor on Syrian territory if refugee flows became dangerously unmanageable or the scale of killing in Syria became intolerable. But it had always said this would require international endorsement.

"NATO just doesn’t look like it’s in the mood," David Hartwell, Middle East analyst at IHS Jane’s, said. "What you might get is the Turks forcing a de facto no-fly zone. . . ."

Erdogan announced earlier this week that he had issued new rules of engagement to his border troops and said any Syrian military elements approaching Turkish borders and deemed a threat would be treated as a target. But he failed, perhaps deliberately, to specify how close Syrian forces could come to the border before becoming vulnerable.

Rebels sources said they saw two Syrian attack helicopters on Friday, flying about 4 km from the Turkish border in Idlib province and landing at an army base at Bab al-Hawa, close to Reyhanli, one of the places where Turkey has stationed anti-aircraft defenses.

It was the first time aircraft had been spotted close to the border and appeared to test Turkey’s new rules of engagement.

"The Syrians might accept a very narrow zone along the border. Syria will remain very reluctant to get involved in any conflict with Turkey. They would be up against a very serious military foe," said Malcolm Chalmers, research director at Britain’s Royal United Services Institute.  (photo: Reuters)