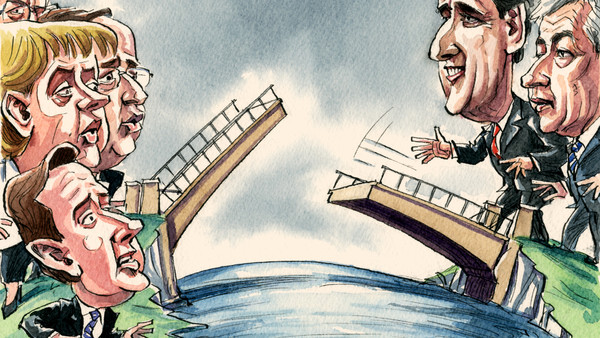 From Philip Stevens, Financial Times:  Mr Obama’s nominations of John Kerry to the state department and Chuck Hagel to the Pentagon would fill these two top posts with politicians that Europeans should clamour to do business with. They hail from a generation with Atlanticism in their blood: Americans whose worldview was shaped by the importance of the alliance in fighting the cold war.

They are staunch supporters of Nato and the EU. Mr Hagel chaired the Atlantic Council, the Washington think-tank committed to sustaining transatlantic ties. Both nominees are stalwarts of the Munich Conference on Security Policy.

There is more good news for those who feared that a continent engulfed in the eurozone crisis was doomed to geostrategic irrelevance. The White House wants to revive the long-stalled goal of a transatlantic free-trade area. Europe is a cause of much frustration, you hear US officials say (not least when the president has to meet three or four different “presidents” from Brussels), but it is still America’s staunchest ally and its most important economic partner. How better to reinvigorate the alliance (and generate much-needed economic growth) than a bonfire of the regulatory controls and bureaucratic infighting that still stymie trade and investment. . . .

Decorated war veterans, Messrs Kerry and Hagel are leading members of the talk-first and shoot-only-if-you-have-to school of US foreign policy. They see alliances as multipliers of, rather than constraints on, US power. They are not soft. Rather they understand that even a superpower should think hard about how a war will end before deciding to start one. Iraq and Afghanistan stand as bloody and expensive testimony to the worth of such common sense. . . .

There is a bigger opportunity in Washington’s pivot to Europe. Here is a chance for Europeans to break free of the suffocating introversion of the euro crisis and reimagine a role for themselves on the global stage. The drawdown from Afghanistan provides the space to re-engineer Nato in a way that preserves its place as the world’s most powerful military alliance. Why cannot Europe pivot to Asia alongside the US?

Refurbishing the alliance will come with a price tag – but then so does everything worthwhile. Europeans cannot expect to be taken seriously if they ratchet down further their feeble defence budgets. The US already accounts for more than 75 per cent of Nato spending. A transatlantic free-trade agreement would require painful concessions on both sides, but the sine qua non is a European willingness to tackle agricultural subsidies.  (graphic: Financial Times)