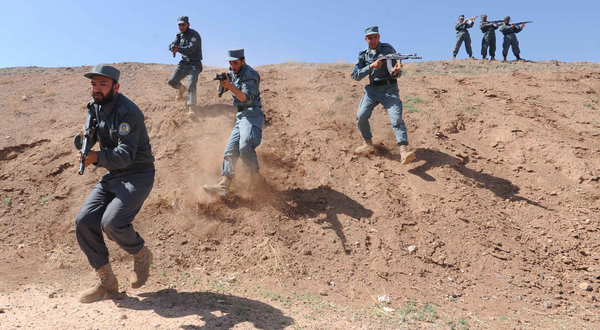 From Richard A. Oppel Jr. and Graham Bowley, the New York Times:  Even as attacks by Afghan security forces on NATO troops have become an increasing source of tension, new NATO data shows another sign of vulnerability for the training mission: even greater numbers of the Afghan police and military forces have killed each other this year.

So far, Afghan soldiers or police officers have killed 53 of their comrades and wounded at least 22 others in 35 separate attacks this year, according to NATO data provided to The New York Times by officials in Kabul. By comparison, at least 40 NATO service members were reported killed by Afghan security forces or others working with them.

Both figures fall under what officials call insider attacks, and both numbers have climbed sharply over the past two years, Western officials say. But while officials say that a vast majority of attacks on Western forces are born out of outrage or personal disputes, the Afghan-on-Afghan numbers are said in larger part to reflect a greater vulnerability to infiltration by the Taliban.

Further, there are concerns about cultural clashes within the rapidly expanding Afghan forces themselves, Afghan and NATO officials say, raising questions about their ability to weather the country’s deep factional differences after the NATO troop withdrawal in 2014.

“Three decades of war can play a pivotal role in the internal causes,” said Maj. Bashir Ishaqzia, commander of the Afghan National Police recruitment center in Nangarhar Province. He said one of the biggest challenges for the army and police forces was a lasting “culture of intolerance among Afghans, as well as old family, tribal, ethnic, factional, lingual and personal disputes.”  (photo: Aref Karimi/AFP/Getty)