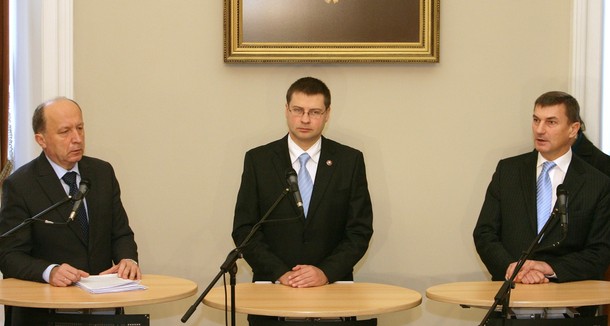 From DPA:  Leaders of the Baltic states thanked the United States on Friday for refusing to recognize their countries’ annexation by the Soviet Union during and after World War II.

The prime ministers of Estonia, Latvia and Lithuania sent a joint letter to President Barack Obama expressing their gratitude for the US decision, which was made exactly 70 years ago. …

"On July 23, 1940, the acting Secretary of State Sumner Welles began a long-lasting non-recognition policy of illegal Soviet occupation and annexation which enabled the diplomatic representations of the Baltic states to continue working and gave their people strength and hope to go on campaigning for their freedom," the letter stated.

"We, the prime ministers of Estonia, Latvia and Lithuania, would like to express our gratitude and appreciation to the American people for their courageous and highly moral action and congratulate you, Mr President, on this anniversary of the successful foreign policy," it said.  (photo: Getty)

(July 22, 2010) From the State Department:  Secretary of State Hillary Clinton‘s statement on Seventieth Anniversary of the Welles Declaration.

On behalf of President Obama and the people of the United States, I join the governments and people of Estonia, Latvia and Lithuania in marking the seventieth anniversary of the Welles Declaration this July 23, and reaffirm the strong bonds between our countries. Following the Soviet annexation of the three Baltic States in 1940, acting Secretary of State Sumner Welles declared that the United States would not recognize the incorporation of these states into the Soviet Union. More than 50 countries followed the United States in adopting this position. This milestone document supported the Baltic States as independent republics at a critical moment to ensure their international recognition and facilitate the continued operation of their diplomatic missions during 50 years of occupation.

The Welles Declaration is a testament to our longstanding support of the Baltic States and a tribute to each of our countries’ commitment to the ideals of freedom and democracy. As Estonia, Latvia, and Lithuania celebrate nearly 20 years of fully restored independence, we honor our Baltic friends as valued NATO allies, strong partners in Europe and on the international stage, and living proof of all that democracy and good governance can achieve.