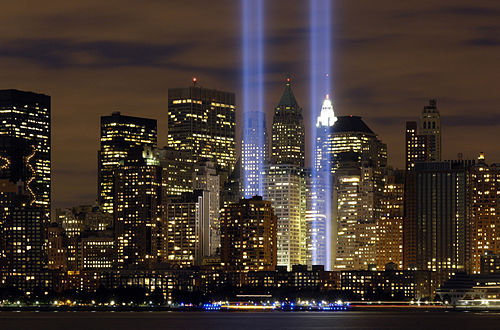 From Lord Robertson, the New Atlanticist:  The Ambassadors meeting was sombre and grave. At that moment, we had no conclusive knowledge of the motive or nationality of the perpetrators of this atrocity – it was not so long before that the Oklahoma bomber had carried out his own home-made attack. But it certainly looked like foreign terrorism and on a grand scale.

We knew that something fundamental had happened and that for the world a new chapter had opened. For us round that table, at the seat of the world’s most successful defence alliance, the sincere sympathy and solidarity expressed with the people of the US was overlaid with thoughts of what all this meant for our organisation and for wider global security.

In the margins of the meeting, my officials led by Assistant Secretary General Edgar Buckley and Private Office Director Jon Day, were already working on what we must urgently do in the face of this attack. One of the most momentous options considered was whether this assault on the US meant invoking Article 5 of the North Atlantic Treaty – the self-defence clause. An attack on one state to be considered as an attack on all then 19 NATO countries.

The work on that and on NATO’s wider response was to go on overnight. Then, in the early morning, there were conversations with US Secretary of State Colin Powell and National Security Adviser Condoleezza Rice.

I insisted that Article 5 was relevant and was the ultimate act of solidarity with the people of the US. What had the self-defence clause meant if it was not valid at this dramatic moment of aggression? Doubts were raised– especially over if even one of NATO’s 19 nations was to disagree. . . .

We had a meeting, the first ever by a NATO Secretary General to the EU Foreign Ministers Council. Nobody asked about Article 5 (this, despite my raising the issue beforehand with the Belgian Foreign Minister Louis Michel of the EU Presidency). I then tabled the Draft Statement invoking Article 5. It was the first time in NATO’s 50 years it was to be activated.

Five and a half hours of consideration in 19 capitals followed. I had fraught, nerve-racking telephone conversations with Prime Ministers, Foreign Ministers and in one case, through the Foreign Minister’s mobile phone, with a whole Cabinet meeting.

By 9.20 pm, we had the answer. Unanimous support. I was drained but enormously relieved.

I read out the endorsed statement to a packed press conference, realising only as I read it out the deep significance of the historic words I was using. In both Europe and in the US, the impact was huge. Nor would it have been unnoticed in the caves of the Tora Bora Mountains where the evil criminality of the day before’s atrocity had been dreamed up.

In very different circumstances to that envisaged by the authors of Article 5 in 1949, the mighty Alliance had stood by an ally under attack. The world that day had changed, and NATO’s transformation in the post-9/11 world had begun.

Lord Robertson is a member of the Atlantic Council’s International Advisory Board and former Secretary General of NATO. This piece was originally published in NATO Review.