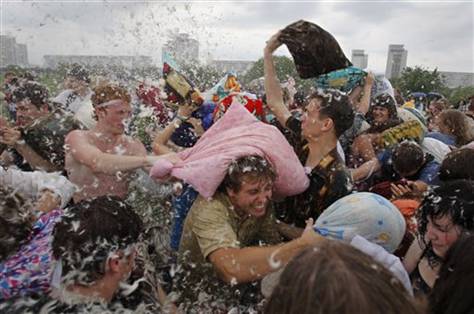 From the AP:  In Belarus, an authoritarian, former Soviet nation, even a pillow fight can be seen as a threat to national security.

On Thursday, club-wielding police dispersed about 400 pillow-wielding youths who gathered in Minsk, the capital, to humorously commemorate the anniversary of the Battle of Grunwald. It stopped an invasion of German Catholic crusaders in Eastern Europe 600 years ago.

Some 50 of the youths were detained.  (via Laura Rozen, Politico)

From RIA Novosti:  Belarusian President Alexander Lukashenko said on Friday that he sees no other candidates among the opposition in upcoming presidential elections.

"Hopes that they [the opposition] will choose a single candidate…and squash the incumbent president are illusory" Lukashenko said.

Belarus will hold the next presidential elections before February 6, 2011. …

The Belarusian leader, once dubbed by Washington "Europe’s last dictator," is making efforts to improve relations with the European Union and the United States.