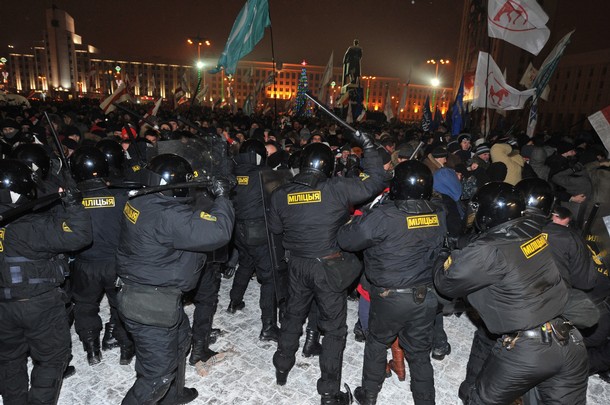 From Judy Dempsey:  As demonstrators in the Belarussian capital of Minsk protested Sunday night against what they claimed were flawed presidential election results, the European Union looked on helplessly.

Hundreds of people were beaten and imprisoned. The opposition’s offices were raided. Web sites of independent movements were shut down. Searches and house arrests of those suspected of sympathizing with the opposition continued for several days. All in Europe’s backyard.

“The E.U.’s policy toward Belarus is in complete shatters,” said Jörg Forbrig, an expert on Eastern Europe at the German Marshall Fund of the United States in Berlin. “It is hard to see what options the E.U. can now pursue,” he said from Minsk. …

“Belarus was playing off Russia, the E.U. and China,” said Eugeniusz Smolar, a senior fellow and regional expert at the Polish Institute of International Affairs in Warsaw. …

The crackdown means that the Union now has little room for maneuver, according to Mr. Smolar. The main reason is Russia. Neither President Dmitri A. Medvedev nor Prime Minister Vladimir V. Putin has hidden his dislike for Mr. Lukashenko, who is regarded as an unpredictable neighbor. In an unusual outburst a few months ago, Mr. Medvedev denounced his Belarussian counterpart as corrupt.

But with China trying to establish a stronger economic foothold in Belarus, the Kremlin has stepped in to prevent losing Belarus either to Chinese or E.U. influence. “With China much more active in Central Asia and Eastern Europe and the E.U. on Russia’s doorstep, Russia has major geostrategic considerations to think about,” Mr. Smolar said.

Two weeks ago, after lengthy negotiations, the presidents of Russia, Belarus and Kazakhstan signed a declaration on the establishment of a Common Economic Space. Although the details are still vague, it is supposed to lead to a common market based on the free flow of goods, services, capital and labor.

In return for ratifying the Common Economic Space, Belarus will receive from Russia duty-free supplies of oil for its refineries. Such an offer will prevent any energy shortages this winter — which might bolster Mr. Lukashenko’s power but also make him more dependent on Russia.  (photo: Getty)