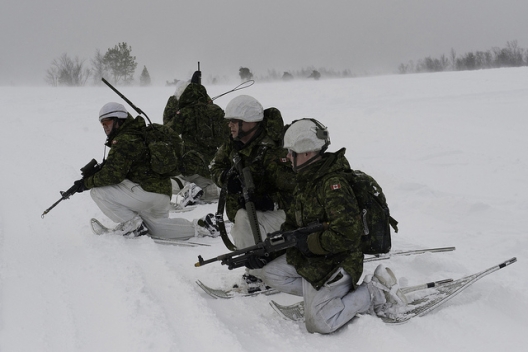 At a press conference marking the visit of the North Atlantic Council to Norway in May, Secretary-General Anders Fogh Rasmussen announced that “at this present time, NATO has no intention of raising its presence and activities in the High North.” For some, this may have come as a surprise, given the growing interest and resources allocated to the region by actors including NATO’s own Arctic member states, non-NATO Arctic states, non-Arctic states and international organizations alike. However, the decision by NATO not to follow suit for now is a sound strategy justifiable on at least three grounds.

It is beyond dispute that the “High North” – the English term originally used to encapsulate the untranslatable Norwegian concept of “nordområdene,” now frequently used to refer to the Arctic in a political or security context – has attracted increasing worldwide attention in recent years. For instance, in its 2013 Yearbook, the United Nations Environmental Program reported that the record low Arctic summer ice coverage of 2012 was 50 percent below the average in the 1980s and 1990s. For this reason, UNEP has expressed concern about the likely impact of more human activity in the Arctic, where ecosystems are already fragile. The European Union has also turned its attention to the Arctic: in a 2008 Communication, the European Commission specifically identified four EU interests in the Arctic, proposing a series of actions in support, and the EU-led Northern Dimension initiative has sought to promote economic and environmental cooperation in areas including the Arctic.

States, too, are shifting their gaze northwards. Last year’s admission of China, India, Japan, South Korea and Singapore as permanent observers to the Arctic Council is just one indicator of their rising interest in the region’s commercial potential, including a quicker and cheaper transit route for Asian products destined for Europe, and access to untapped natural resources. Long the most dominant Arctic state by virtue of its sprawling coastline and strong historic and cultural ties to the area, Russia is also reasserting its Arctic interests, following the release of its Arctic policy in 2008. This month, a convoy of military and support vessels starts re-establishing a presence on Kotelny Island – the location of a former military base closed in 1993 – and the formation in two years’ time of an Arctic brigade based near Russia’s border with Norway is planned.

Since 2006, all of NATO’s Arctic member states – the United States, Canada, Denmark, Norway and Iceland – have released Arctic policies recognizing the challenges and opportunities faced by the region as it is transformed by climate change, and outlining how they intend to respond. While the primary focus of these policies has been on non-military measures to address the broad range of effects triggered by greater ice melt, some have also explicitly acknowledged a role for the military, and have already taken steps to reinforce their Arctic defense capabilities.

Thus, for instance, Norway relocated its Armed Forces Operational Headquarters to Bodo, north of the Arctic Circle, in 2009, and has been open about the greater focus of its armed forces on their ‘tasks in the north’; Canada expects a new polar icebreaker to replace the Louis St Laurent in 2017, and to upgrade a refueling facility in Nanisivik; and Denmark has established its Arctic Command in Nuuk, Greenland, while announcing it will acquire a new inspection vessel of the ice-capable Knud Rasmussen class in 2014.

Against this backdrop, NATO’s reluctance to increase its focus on the Arctic may appear curious. In fact, it is eminently sensible, for three reasons. Firstly, NATO’s existing presence and activities in the Arctic are not inconsiderable. Joint training, such as Exercise Loyal Arrow in Swedish Lapland (2009) brings together NATO and non-NATO states to test their mettle in one of the world’s coldest and harshest environments. Exercise Cold Response, held regularly in Norway since 2006, is one of the largest training events; last year, 14 NATO and non-NATO states participated, totaling over 16 000 troops. Apart from training, NATO also coordinates member states to conduct regular air policing duties over Iceland. In terms of assets, NATO’s Active Layered Theatre Ballistic Missile Defense System (ALTBMD) relies on radar and tracking stations in Alaska, Northern Canada and Greenland. Taken together, these examples suggest that reassurance of Arctic member states is already a significant concern within NATO’s planning and decision-making, and that capabilities in the Arctic remain important to the proper functioning of the alliance itself.

As a result, there seems little need currently to redouble efforts. Secondly, it is important to note that there is little consensus about the role of international organizations and multilateral fora in the Arctic generally. As the international spotlight has increasingly shone on the Arctic, the work of fora such as the Arctic Council, the Barents Euro-Arctic Council, the ‘A5’ group of states littoral to the Arctic Ocean, the Nordic Council of Ministers, and the newly-formed Arctic Circle has come into focus. These bodies all aim to promote technical cooperation on social, economic and environmental issues within the Arctic, but differ with respect to membership and geographical scope. Their overlapping workloads and lack of coordination reflect divisions among Arctic and non-Arctic states as to the shape, role and purpose of Arctic governance, and thus the proper source of legitimate authority in the region. Although none of these Arctic bodies is specifically tasked to deal with military and defense matters, rather than jumping into this security gap, NATO is wise to continue to tread its own path, until such time as greater clarity and agreement emerges about the nature of the Arctic as a political space.

Finally, the vast number of unknowns with respect to the Arctic, militate against an enhanced NATO presence for the moment. Geographically, the fundamentals of the Arctic are still being gripped: to what extent, and in what timeframe, the ice sheet will continue to melt remains debatable, though an overall downward trajectory in ice coverage is clear. Large swathes of territory and water are yet to be charted and mapped in the Arctic; in 2009, the Canadian Hydrographic Service estimated that only ten percent of the Canadian Arctic has been surveyed to modern standards. Thus far, politically, the renewed military focus of Arctic states on the region is consistent with the defense of their national borders and maritime jurisdiction.

However, where claims to Arctic waters and continental shelves remain contested, and greater accessibility to the region means more human activity, interests, perceptions and intentions can shift quickly. In the midst of such uncertainty, NATO has made the pragmatic choice – neither to retreat from the challenges ahead, nor to expand to fill the Arctic’s security governance vacuum. Instead, it will continue with the role it performs best – namely, ongoing provision of the security guarantee to its members, and maintaining a “watching brief.”

Dr Page Wilson is a Senior Lecturer at the Royal Military Academy Sandhurst, UK. The views expressed in this article are solely those of the Author and do not reflect the official policy or position of the UK Ministry of Defense, or any other office within the Government of the United Kingdom. An earlier version of this article appeared in e-International Relations.