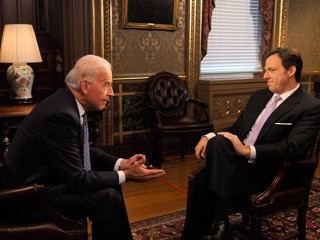 From ABC:  Excerpt from Jake Tapper Interview of Vice President Joe Biden on ‘This Week’

TAPPER: — I want to read you a quote from Jonathan Alter’s new book: "At the conclusion of an interview in his West Wing office, Vice President Biden was adamant in July of 2011, that we’re going to see a whole lot of people moving out. ‘Bet on it,’ Biden said, as wheeled to leave the room, late for lunch with the president. He turned at the door and said once more, ‘Bet on it.’"

Did you say that to…

BIDEN: I did say that.

BIDEN: I did say that.

TAPPER: And what did you mean, a whole lot of people…

BIDEN: Well, what I said…

BIDEN: — if you read three or four paragraphs above that, Jonathan was making a very valid point. He was saying a lot in the military think they outmaneuvered the president to render the July date meaningless. And I was saying that’s simply not true. The military signed on. Petraeus signed on. Everybody signed onto not a deadline, but a transition, a beginning of a transition.

TAPPER: But what does a whole lot of people moving out mean?

BIDEN: Well, what I was talking about was you have — we’re going to have over 100,000 people there and two…

TAPPER: More, right, if you include NATO troops?

BIDEN: A hundred and forty thousand people there. And there’s going to be a drawdown of forces as we transition. There are 34 districts in Afghanistan and the plan is, as we train up the Afghanis, we are going to, beginning in August, say, OK, now you’ve got this province, we no longer have to have American or NATO forces in that province. There will be a transition.

And really what I was responding to was the idea that the president had been outmaneuvered. I was saying make it clear. And so it — it wasn’t so much numbers I meant. It could be as few as a couple thousand troops. It could be more. But there will be a transition.  (photo: ABC) (video: ABC)