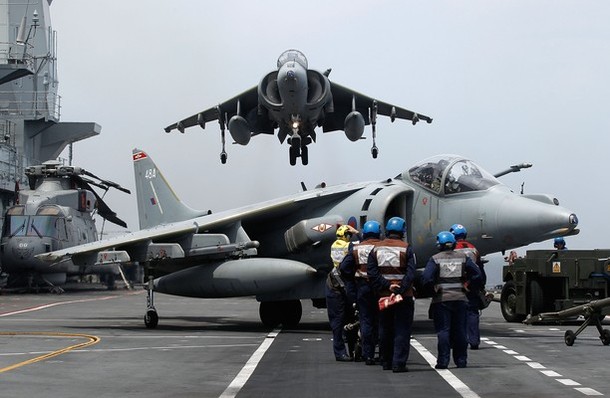 From Tim Castle and John Irish, Reuters:  Britain said on Tuesday it would discuss closer military cooperation with France in talks this week, but played down a report that the two countries would share aircraft carriers to save costs.

Britain is building two new carriers at a cost of 5.2 billion pounds ($8.0 billion) but, like France, is under pressure to find military savings to rebalance public finances.

The Times newspaper said the two nations were considering plans to save money by coordinating their carrier missions so that at least one vessel was on patrol at any time.

Defence Secretary Liam Fox travels to Paris on Friday for talks with his French counterpart Herve Morin, but a British Ministry of Defence (MoD) source told Reuters they would not be making any announcements on carrier sharing.

"We will be looking at areas of closer cooperation between the two countries. But there are no plans to share carriers," the source said. …

However in Paris, a French Defence Ministry source said sharing aircraft carriers had been "touched upon a few months ago and is now back" on the agenda.

"You have to see that there is an opportunity for both sides, especially for us. Instead of us paying for a second one, we have to work with our partners," the French source added.  (photo: Getty)