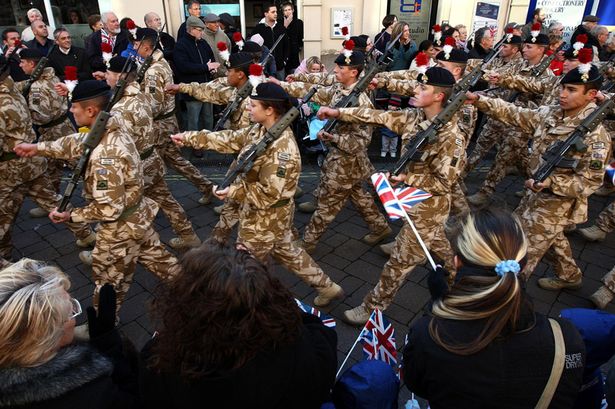 From Andrew Chuter, Defense News:  Seventeen major units are to be culled by the British Army as part of a transformation plan that will see regular force personnel numbers reduced to 82,000 from the current level of 102,000, the defense secretary announced July 5. . . .

The transformation plan, known as Army 2020, will ax five infantry battalions; three of the 14 Royal Engineer units will go, as well as three of 15 Royal Logistics Corps units. . . .

Other units to be cut will be two Armoured Corps units and one unit each from the Royal Electrical and Mechanical Engineers, the Army Air Corps, the Royal Artillery and the Military Police. The latest cuts bring to 23 the number of units to be axed by the Army since the government rolled out its 2010 strategic defense and security review.

Most of the cuts to units will kick in during the 2013 to 2015 time frame, but the Army expects to complete the wider structural changes involved in its Army 2020 plan over a five-year period. The outline plan involves high-readiness reaction forces aimed at meeting the Army’s contingency tasks, and adaptable forces based on a regional footprint and held at lower readiness.

A third force will encompass specialist support units, such as logistics and intelligence and surveillance.

Roles for the adaptable forces will include manning garrisons in the Falkland Islands and elsewhere overseas, and the generation of additional brigade-sized units for enduring operations.  (photo: PA)