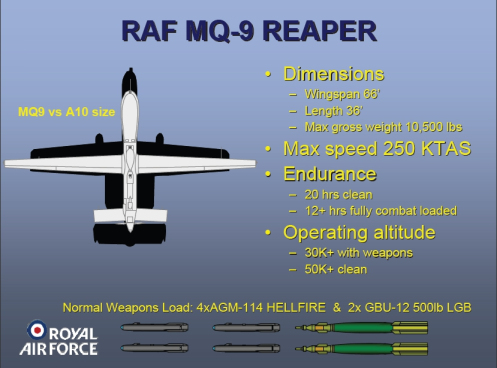 From Telegraph:  The deployment of the five armed Reaper aircraft, which are used for surveillance and combat operations, will double the number that Britain has available.

The US-made unmanned aerial vehicles will be controlled by pilots at a new hi-tech hub based at RAF Waddington in Lincolnshire.

Britain already has five Reapers, targeting suspected insurgents in Helmand, but until now they have been operated from Creech Air Force base in Nevada, because in the past the UK has not had the capability to operate them from here.

Plans for the new Reaper group, known as 13 Squadron, were first announced last year and the squadron will be officially “stood up” at a ceremony this Friday, meaning the RAF will now have ten of the drones in Afghanistan.

The Ministry of Defence said operations would not begin immediately. According to the Guardian they are expected to start within six weeks. . . .

There are expected to be three control terminals at RAF Waddington while the aircraft will be based in Afghanistan. The other aircraft will continue to operate from Creech though eventually operations there will be wound down and brought to the UK.

Britain has used drones in Afghanistan since 2006 and its Reapers have flown thousands of hours and fired more than 300 missiles.  (graphic: Royal Air Force)