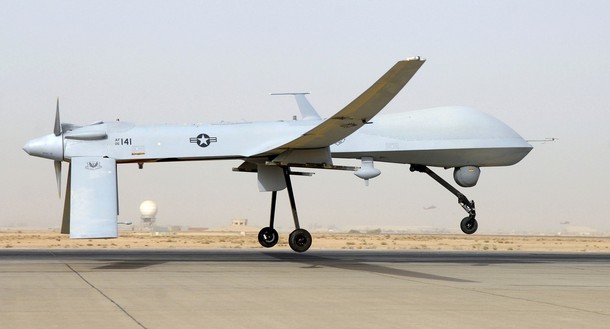 From James Blitz, the Financial Times:  Liam Fox, Britain’s defence secretary, will travel to the US next week to try to persuade the Obama administration to provide fresh air assets to help relieve Misurata, the Libyan city besieged by Colonel Muammer Gaddafi’s forces.

As intense fighting continued in Misurata on Thursday between Col Gaddafi’s forces and Libyan rebels, the FT has learned that Mr Fox will hold talks with Robert Gates, the US defence secretary, at which the question of US military support for the Nato mission will be high on the agenda. . . .

Mr Fox and General Sir David Richards, the UK’s chief of defence staff, will tell Mr Gates that the deployment of UAVs by the US would give significant extra firepower to the Nato effort.

“What the UAV gives you is a speed of response when you see regime tanks or artillery suddenly going on the move,” said a senior British official. “That time-sensitive response is critical and can help you attack tanks without risk of collateral damage. . . .”

Mr Fox and Gen Richards are set to hold a rare “two plus two” meeting in Washington with Mr Gates and Admiral Mike Mullen, chairman of the Joint Chiefs of Staff.

One factor that may help persuade the US to give additional support in Misurata is the deteriorating humanitarian crisis in the city. Rebel leaders believe Col Gaddafi’s forces have killed more than 1,000 people there since the siege of the city began.  (photo: Reuters)