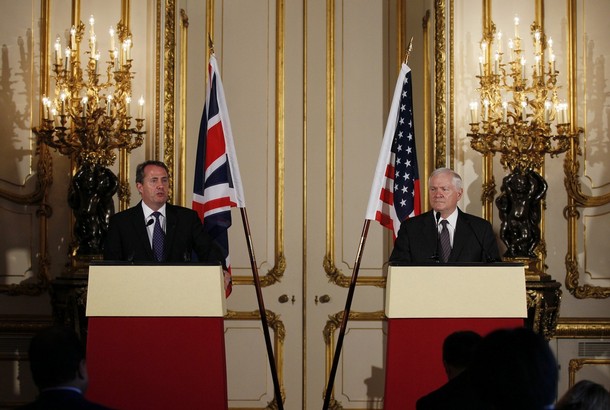 From Michael Gordon and John Burns, the New York Times:  Plans by the British government to make significant cuts in defense spending have spurred concerns among American military experts about Britain’s ability to carry out its role as the United States’ most dependable ally. …

With other European nations embarking on substantial military spending retrenchments, and the Obama administration committed to acting in concert with allies whenever possible, the British spending review has received high-level attention in Washington, including in a meeting on Wednesday between Liam Fox, the British defense minister, and Defense Secretary Robert M. Gates.

Mr. Fox told reporters later that, after any cuts, the British military would be able to respond to a broad array of threats and retain capabilities particularly valued by the Pentagon. He identified those as Britain’s Special Forces, its nuclear deterrent, its participation in the Joint Strike Fighter program and its ability to deploy substantial forces when needed.

“We would be able to maintain a moderate deployable force for a considerable length of time, if required,” Mr. Fox added. “Maybe not exactly at the level we have now, but at still a respectable and useful level. …”

“They have the capability to go in early on in a crisis, particularly on the ground, to be with us,” said a senior United States Defense Department official, who asked not to be named because of the confidential nature of the continuing consultations. “If they maintain the full-spectrum capability to operate with us quickly on the front end of a conflict, it is helpful. That is what we are watching and talking to them about.”  (photo: Getty)