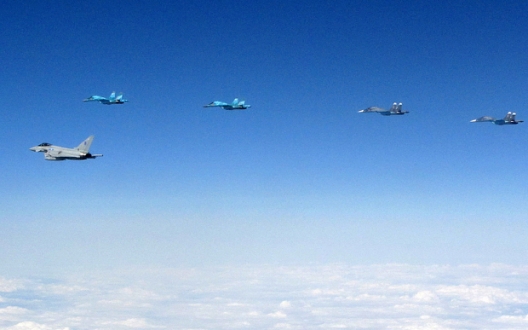 The Typhoon aircraft, from 6 (Fighter) Squadron, RAF Lossiemouth were launched after multiple groups of aircraft were detected by NATO air defences in international airspace near to the Baltic States. Once airborne, the RAF jets identified the aircraft as 4 x FULLBACKS Sukhoi Su-34 fighters, 4 x FOXHOUNDS Mikoyan MiG-31 fighters and 2 x Antonov An26 ‘CURL’ transport aircraft who appeared to be carrying out a variety of routine training. The Russian aircraft were monitored by the RAF Typhoons and escorted on their way.

Secretary of State for Defence, Michael Fallon said: “Once more the RAF and our state of the art Typhoon fighters have demonstrated our commitment to NATO’s collective defence. Air interceptions such as this highlight the vital importance of the UK’s contribution to the Baltic Air Policing mission and demonstrate our collective resolve to protect NATO airspace alongside our allies.”

From Ben Farmer, Telegraph:  And in February it was revealed that British fighter jets had been scrambled more than 40 times to deter Russian military planes encroaching UK airspace since David Cameron had taken office.