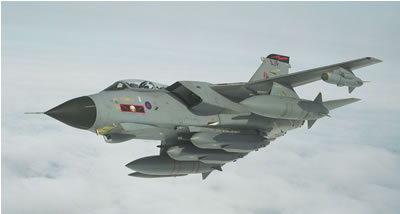 From the Press Association:  RAF Tornado jets have joined in the operation to enforce a no-fly zone over Libya as the international community swung into action against Muammar Gaddafi.

The Military of Defence confirmed Stormshadow missiles were launched from Tornado GR4 fast jets, which flew 3,000 miles from RAF Marham in Norfolk and back.

As part of a co-ordinated strike, a barrage of 112 Tomahawk cruise missiles – some of them British – was also fired at Libya to knock out the dictator’s air defence systems at more than 20 coastal locations. …

Defence Secretary Liam Fox said: "The fast jets flew 3,000 miles from RAF Marham and back, making this the longest range bombing mission conducted by the RAF since the Falklands conflict. This operation was supported by VC10 and Tristar air-to-air refuelling aircraft as well as E3D Sentry and Sentinel surveillance aircraft."  (photo: BAE Systems)