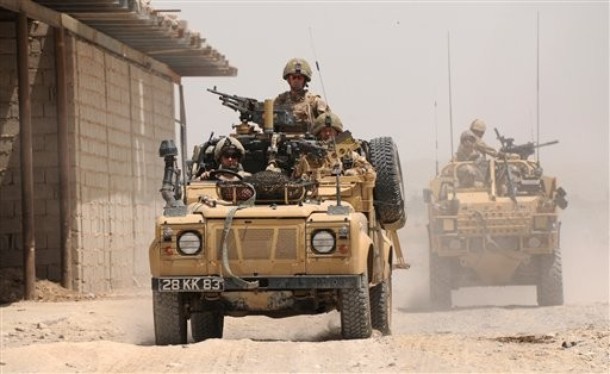 From the Telegraph:  British troops will be withdrawn from the Sangin area of Afghanistan later this year, Defence Secretary Liam Fox told MPs.

He said the UK had agreed to a redeployment which will see US Marines assume responsibility for the area where nearly a third of UK deaths in the conflict have occurred. …

Dr Fox also said 300 extra British troops from a reserve battalion kept on stand-by in Cyprus would be deployed on a temporary basis until the switchover was complete – likely to be in October.

”The result will be a coherent and equitable division of the main populated areas of Helmand between three brigade-sized forces, with the US in the north and the south, and the UK-led Task Force Helmand, alongside our outstanding Danish and Estonian allies, in the central population belt,” he told the Commons. …

US Marine Corps now has more than twice as many troops in Helmand as Britain.

Nato commanders have been reviewing their counter-insurgency mission in recent months. On a visit to London last month, Robert Gates, the US Defence Secretary, said: “The view of the British military is they probably don’t have enough manpower to do that their areas of Helmand.”

Today’s announcement follows a change in the Afghan command structure that puts all troops in Helmand under the command of a US Marine Corps general.  (photo: AP)