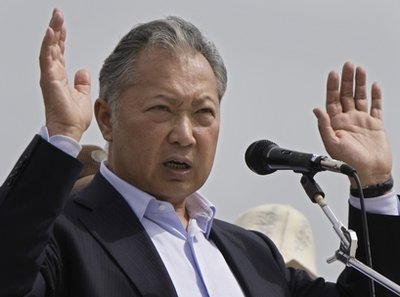 From Peter Leonard and Aizada Kutuyeva, the AP:  Police in Kyrgyzstan have detained a brother of deposed President Kurmanbek Bakiyev, authorities said Thursday — the latest effort to solidify control over the country’s tense south and dismantle the former leader’s entourage. …

Akhmat Bakiyev was captured Wednesday night in a special operation outside the family’s political stronghold in the southern city of Jalal-Abad, which was ravaged last month by a wave of violence against ethnic Uzbeks.

Police said Akhmat Bakiyev immediately confessed to involvement in the unrest, which was sparked by small clashes in the nearby city of Osh that swelled into devastating rampages by ethnic Kyrgyz mobs on Uzbek neighborhoods. The violence left hundreds of minority Uzbeks dead and forced 400,000 others to flee.

The violence had political overtones, since many southern Kyrgyz backed Bakiyev, who was ousted in a bloody revolt in April, while ethnic Uzbeks supported the interim government.

The latest arrest raised the possibility of new violence but also showed the government was determined to halt months of turmoil. A caretaker government is now leading the country until elections in October.  (photo: Sergei Grits/AP)