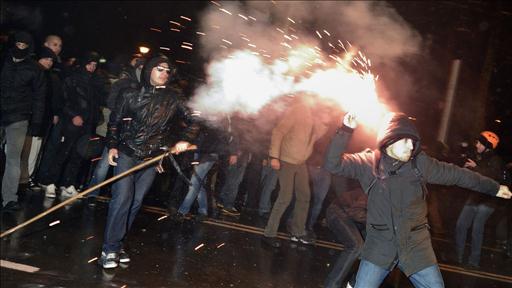 "We have dignity and honor. It is the people who put us in power and we give it back to them today," Prime Minister Boyko Borisov told parliament in an announcement that shocked Bulgarians even after days of swelling protests.

Mr. Borisov said the threat of protests turning violent spurred his decision. "I cannot stand looking at a bloody Eagles’ Bridge," he said, referring to the iconic intersection in downtown Sofia that was the scene of clashes between police and protesters on Tuesday. "Every drop of blood is a shame for us."

Bulgarian President Rosen Plevneliev is now likely to seek to form a caretaker government to administer the country and will probably propose to bring forward national elections to sometime in the spring, analysts said. Mr. Plevneliev’s office said in a statement on Wednesday that the president had canceled all meetings on his agenda and would comment on the resignation on Thursday. Mr. Borisov said his Citizens for the European Development of Bulgaria, or GERB, wouldn’t be a part of that administration. . . .

The news casts some doubt over Mr. Borisov’s last act in office: a Tuesday vow to cut energy prices by 8% and to revoke the license of the local unit of Czech power company CEZ AS after prosecutors earlier said they were investigating allegations of "systematic violations" of public-procurement rules. Bulgaria’s energy-market regulator said in a statement on Wednesday that it was launching a review of local business practices of CEZ, but no final decision on the company’s business license be made before April.

Analysts said that energy companies could be in the firing line of the next government because the coming election campaign will focus politics on the energy sector.

"To reduce prices, the next government will face pressure to renationalize power utilities and retroactively cut renewable-energy subsidies; an acute risk we will watch in coming weeks," said Otilla Simkova, an analyst with political risk consultancy Eurasia Group.

Voter anger at austerity measures has toppled governments across Europe. In the central and eastern part of the continent, governments have collapsed as voters burdened by economic hardship have become less tolerant of political corruption once seen as unavoidable.

After at-times violent protests against government spending cuts and alleged corruption, Romania changed its prime minister twice last year. The center-right was voted out in favor of Socialists in Slovakia, while austerity-weary Lithuanians also voted out fiscal conservatives in favor of their opponents. Slovenia’s prime minister is trying to hang on at the helm of a minority government amid mounting protests there over austerity and corruption. . . .

Although outside the euro zone, Bulgaria is overwhelmingly dependent on the bloc’s larger economies for growth. The country won admiration from Brussels by reducing its budget deficit to 0.5% of gross domestic product last year from 2% in 2011. The economy managed a 0.5% expansion in the fourth quarter from a year earlier, marking its 10th successive quarter of growth.   (photo: Getty)