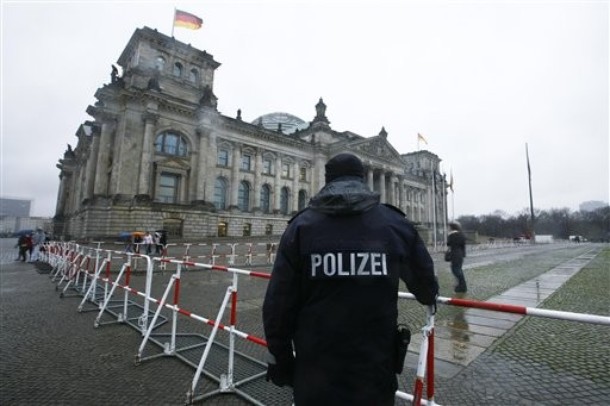 From Michael Slackman, the New York Times:  Germany’s recent decision to declare a terrorism alert and dispatch heavily armed police around the nation was set off by phone calls from a man who said he wanted to quit working with terrorists and warned of a pending Mumbai-style attack , according to a law enforcement official with firsthand knowledge of the alert. …

But the caller, who claimed to have been a jihadist working with terrorists in the Pakistan-Afghanistan region, phoned the federal police three times providing what law enforcement officials said was concrete information: plans for a team of armed terrorists to rampage through the Reichstag, the popular tourist site that also serves as the home for Germany’s Parliament.

Even more alarming, the man said that there were already two members of the group in or near Berlin, and that four others would soon be trying to join them, according to the official, who spoke on the condition of anonymity because of his work in intelligence and security matters.

The existence of the caller, who was not identified, was first reported in the German magazine Der Spiegel.

At the moment, the official said, security agencies were focused on four or five possible terrorist plots aimed at different locations around the country. The official said the authorities were uncertain if the plots were linked in one grand scheme or if they were completely separate. …

Security forces are still on the lookout for two men, believed to be in the Berlin area and part of the plot on the Reichstag, and federal and intelligence forces have been watching German citizens known to have traveled to the Pakistan-Afghanistan region. Two German citizens believed to be connected with terrorist training camps are being held in a Turkish prison, awaiting return to Germany, officials said.  (photo: AP)