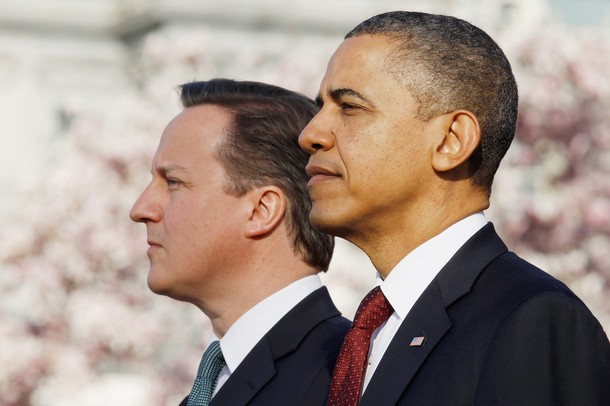 From Stephen J. Flanagan, AOLDefense:  When British Prime Minister David Cameron meets with President Obama this week, their discussions about Syria, Afghanistan, and Iran will dominate headlines. Also important, though less high profile, is the two allies’ preparations for NATO’s May Chicago Summit, which will seek to bolster the alliance’s strained mission in Afghanistan and develop plans to maintain essential military capabilities in an era of austerity. . . .

The two leaders will also discuss plans to limit the gap between projected European military capabilities and the missions allied leaders have said their forces must collectively be prepared to undertake. This will require difficult reforms, enhanced multinational cooperation, more efficient spending, and long-term investments. Otherwise, NATO will need to lower its level of ambition or live with higher risks in future crisis management operations such as Libya and even in maintaining collective defense commitments against diverse global threats.

The austerity measures being implemented by most European governments will result in diminishing defense budgets over the next five years or longer. While still a leading contributor to NATO, the UK defense budget is slated to decline by 8 percent through 2014, and plans for a leveling off after that seem dubious. Reductions by many other allies are even steeper. These cuts will further erode European military capabilities already suffering from two decades of underinvestment and make their forces even more reliant on U.S. support systems. European members of NATO still spend a sizable amount on defense, over $296 billion in 2010- more than China, Japan, Saudi Arabia, Russia, Brazil, and Australia combined. However, they spend those resources badly on duplicative legacy capabilities, and many personnel are ill prepared and equipped for emerging missions. . . .

NATO’s Chicago Summit will provide allied leaders an opportunity to demonstrate that the transatlantic relationship remains vibrant in the face of economic constraints and that the alliance is implementing a sustainable strategy for transition in Afghanistan and addressing emerging threats. European governments could answer U.S. concerns about diminishing military capabilities by making a sustained commitment to NATO’s Smart Defense and other initiatives needed to realize a credible and effective NATO military posture for 2020. Now is the time for Obama and Cameron to draw up their campaign plan for Chicago.

Stephen J. Flanagan is Henry A. Kissinger Chair at the Center for Strategic and International Studies in Washington. He served in senior positions in European affairs during the G.H.W. Bush and Clinton administrations and is the author of A Diminishing Transatlantic Partnership?  (photo: Getty)