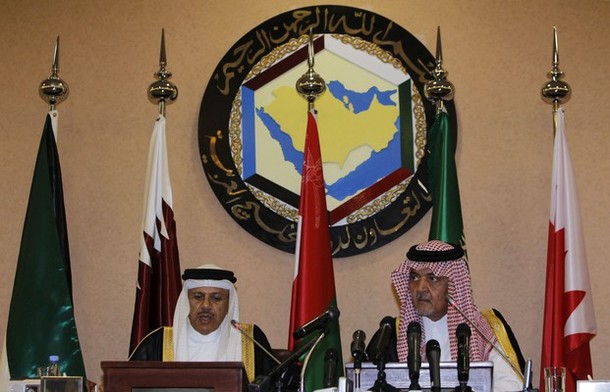 From Zachary K. Goldman & Mira Rapp-Hooper, the Diplomat:  In March of this year, US officials met with the six states of the Gulf Cooperation Council—Bahrain, Kuwait, Oman, Qatar, Saudi Arabia and the United Arab Emirates—marking the inaugural session of the US-GCC Strategic Cooperation Forum.  At that meeting, Secretary of State Clinton declared that the U.S. was “committed to defending the Gulf nations and we want it to be as effective as possible.” And this was not the first sign of increased U.S. interest in a more robust GCC. In September 2011, Secretaries Clinton and Panetta met with leaders of the six Gulf states during the UN General Assembly. In advance of the meeting, Panetta stated that the Council was “emerging as an increasingly critical partner to advancing our common interests,” and impressed upon his Gulf counterparts the importance of a stronger Gulf security architecture. Secretary Clinton and President Obama have each suggested that if Iran goes nuclear the United States may extend its security umbrella to cover Gulf partners, and several recent analyses have suggested that the GCC could be a new NATO. Is a multilateral security umbrella the U.S.’s best defense in this tumultuous region? . . .

[M]ultilateral defense organizations require close integration among the members, but there may be limits to how much further the GCC states can integrate. Additionally, successful security umbrellas require major commitments from their great power patrons but conditions at home, and political realities in the region, may make it very difficult for the United States to invest in new alliance structures.  Building a defense architecture in the Gulf that even approximates NATO’s level of cohesion will therefore be extremely difficult.

Any militarily effective defense pact would require close regional integration. The majority of the military capabilities of GCC states, however, belong to Saudi Arabia, and because many member states are wary of Saudi domination they may be reluctant to entrust their future security to a Saudi-dominated regional body.   Indeed, in 2010, Saudi Arabia alone accounted for nearly 40% of total military expenditures for the Middle East and North African region.  The Kingdom also accounts for approximately two-thirds of the population of the GCC and a similar proportion of the GCC’s total active duty military forces, along with nearly half of its combat capable aircraft.  It is no surprise, then, that some of the other Gulf states fear that any truly integrated regional defense organization will be dominated by Saudi Arabia, and have thus far resisted Riyadh’s efforts to more tightly integrate the GCC. . . .

Whether or not it gets the bomb, Iran is clearly eager to upset the current regional security system that is dominated by the U.S. and its allies. The United States can and should remain close to, and intensify cooperation with, its regional partners in the face of this behavior. A formal NATO-style collective defense pact, however, is unlikely to be viable means of achieving those goals.  Instead, the U.S. should consider intensifying its bilateral ties with some individual GCC countries where appropriate, forming a “hub-and-spokes” system of defense arrangements like the one that has worked so well in East Asia.   Such a system may allow for enhanced military preparations in the form of information-sharing, training, the promotion of interoperability, and holding military exercises in a way that is feasible, but does not require more regional defense integration than GCC states are willing or able to handle.

Like many regional fora, the GCC is a good way to encourage greater cooperation among members, but it is probably not a defense panacea. If the U.S. is to shore up the Gulf’s security architecture, regional pressures as well as domestic ones suggest that less formal bilateral ties are the way to go.

Zachary K. Goldman is the Executive Director of the Center on Law and Security at NYU School of Law, and has previously worked on Middle East issues at the Treasury and Defense Departments. Mira Rapp-Hooper is a PhD candidate in Political Science at Columbia University and is writing a dissertation on nuclear umbrella alliances.  (photo: Reuters)