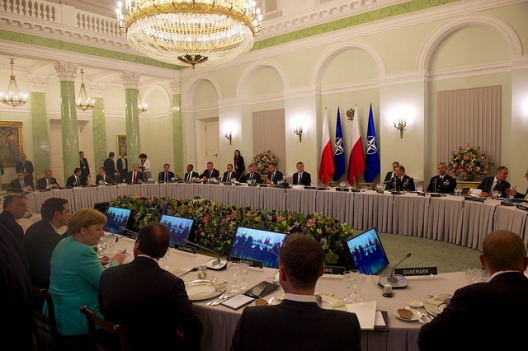 Dinner for Heads of State at NATO Warsaw Summit, July 6, 2016 (photo: Office of the President of Finland)

The dinner between Prime Minister Stefan Löfven, President Sauli Niinistö, and the Heads of States of NATO in Warsaw in July 2016, was a landmark in the partnership between Sweden, Finland and the Alliance. Never had a meeting taken place at that level and format.

The core of their discussion was security of the Baltic Sea region. The special relation that has developed was also highlighted in the final communiqué of the summit, with a special mentioning of the two Nordic countries.

Yet, Sweden and Finland are partners, not allies. How much more can their relationship with NATO deepen? Is there a next step for the partnership, without Sweden or Finland becoming members of NATO?

No doubt, the new focus on Baltic Sea security has once again made Sweden and Finland highly relevant to NATO.

Used to openness as valued peacekeeping partners, Sweden and Finland were shocked in March 2014, when they were excluded from important meeting rooms at NATO headquarters. After the Russian aggression towards Ukraine, information from NATO to Sweden and Finland suddenly stopped flowing. With collective defense back at the core, it was unclear how the roles of partners would develop.

Judging from the Warsaw summit, Sweden and Finland are back on track as intimate partners – probably closer than ever. However, their relationships with the Alliance have shifted focus, from international missions to closer to home. Furthermore, it is now conducted in a tight format, the so called 28+2.

Clearly, the line between members and non-members is becoming blurrier, and the relationship more sensitive, as partner cooperation moves closer to territorial defense. There is a risk that Sweden and Finland find themselves in a grey zone, perceived as “de facto” members by some and as “free riders” by others. Continuing to deepen their relationship with NATO might increase ambiguity further. And ambiguity tends to have a negative impact on stability.

Still, as Ukraine’s harsh experience illustrates, NATO’s Article 5 does not apply to non-members, despite the “new” NATO that developed after the Cold War. In that sense, Swedish and Finnish officials who argue that the red line is drawn at security guarantees are correct. As long as there are not guarantees, cooperation with partners can go deeper.

And there are good reasons to take a pragmatic stance.

An aggressive and revisionist Russia causes a challenging security situation in the Baltic Sea region. With the short distances involved, in combination with the long range of today’s weapons systems, and modern society’s vulnerability, not least in terms of IT systems and energy flows, mutual dependency is great. Hence, the region must be viewed as one strategic area.

That is a fact regardless of whether the countries around the Baltic Sea are members of the Alliance or not. There is also a sense of urgency to make preparations to handle situations that might arise.

Therefore, it makes sense to continue to deepen the partnership between Sweden, Finland, and NATO.

While highly concerned about Russia, neither Sweden nor Finland perceives an immediate threat of an armed attack. The risk is rather to be drawn into a crisis or conflict in the region, most likely at very short notice, either through a land grab by military means, or by hybrid warfare.

The island of Gotland could be at high risk for a land grab, and has consequently recently been re-militarized. Through a range of conducted war games, Gotland’s importance has been acknowledged also by the U.S. and NATO.

The Russian “bubble” of anti-access/area denial capacity (A2/AD) in Kaliningrad complicates the scenario further, since it prevents reinforcement by NATO to the Baltic allies and Poland.

In the ‘new normal’ of the region, NATO, Sweden, and Finland agree on the importance to build strong deterrence, which supports stability, and to avoid any situation in which territory would need to be recovered.

During 2016, official inquiries in both Sweden and Finland have evaluated NATO membership. The inquiries reach similar conclusions on deterrence:
Sweden: The most tangible military consequence of Swedish NATO membership would be to dispel the current uncertainty regarding common action in the event of a Baltic Sea crisis, and that the West’s deterrence therefore most probably would increase.

Finland: Finnish membership of NATO would evidently strengthen Finland’s immediate security as it would be included in the Article 5 guarantees, and strengthen the deterrence of any potential attack against the country.

Despite these conclusions, the inquiries have not lead to a shift towards NATO membership in Stockholm and Helsinki. Political realities in both countries, including public support, indicate that NATO membership is still not the preferred option at the moment.

The Swedish Red-Green government pursues a “security network” policy with emphasis on strong bilateral agreements with key actors such as Finland and the U.S., as well as a deepened partnership with NATO, while military non-alignment remains fundamental.

The Finnish position is different and more pragmatic, in that Finland clearly keeps an open door to NATO, but it is also similar to the Swedish, in that this option is not activated.

Both Sweden and Finland remain open to give and take military support in case of a crisis or war in the region on a case-by-case basis, and have signed Host Nation Support treaties with NATO. As EU members, they are committed to solidarity if peace and security is threatened in Europe.

By being well-prepared and coordinated in processes, structures, and capabilities with NATO, Sweden and Finland also strengthen regional deterrence. Overall, the Alliance would be in a better position to defend the Baltics. And the deep cooperation could serve as a model for other regions, such as the Black Sea.

The following initiatives would serve to deepen cooperation between Sweden, Finland, and NATO ahead:

• Build capabilities together. This should include partner contributions, as additional forces, at appropriate stages of the enhanced NATO Response Force, the spearhead force VJTF, and Framework Nation Concepts.

• Promote closer EU-NATO cooperation. On hybrid threats and building resilience, Sweden and Finland can push initiatives both to the East and the South.

• Develop common situational awareness, together with intelligence and information sharing. This a vital area to establish threat assessments and to avoid accidents and misunderstandings that could lead to unwanted escalations.

• Explore the possibility of cooperating on some phases of NATO´s graduate response planning and national equivalents, given the special conditions applied by A2/AD.

• Develop the political consultation mechanisms for dealing with security challenges between NATO and partners close to home, to prepare also for swift action at the appropriate political level in case of article 4 or article 5 situations.