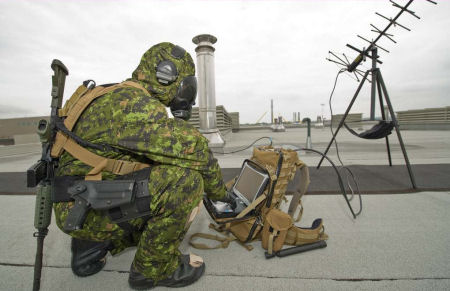 From CTV News :  Amid growing fears that the Syrian regime will use chemical weapons against its own people, Canada has developed a contingency plan to join a NATO coalition ready to deal with the worst-case scenario, CTV News has learned.

If NATO asks for assistance, the federal government is ready to deploy the Canadian Joint Incident Response Unit, which handles chemical, biological and radioactive attacks.

Canada will also send a Disaster Assistance Response Team (DART) to provide clean water in Syria, as well as engineers and staff who can help set up a field hospital.

A navy frigate already based in the area will also be on standby.

Insiders say that Prime Minister Stephen Harper and his cabinet are taking the threat of chemical weapons in Syria very seriously.

But it’s unlikely that Canada will send CF-18 fighter jets over Syria, as it did in Libya to enforce a no-fly zone, or put combat troops on the ground.  (photo: Canada’s Ministry of Defense)