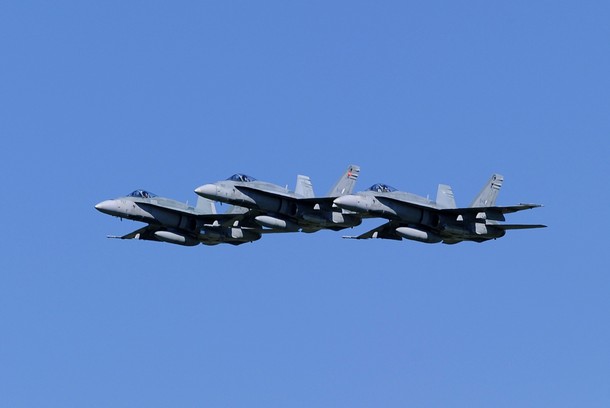 Six CF-18 fighter-bombers are being readied at Canadian Forces Base Bagotville, Que. and are expected to deploy overseas once the Harper government gives the official green light.

Their mission will be to enforce the no-fly zone that the United Nations Security Council authorized Thursday night, the sources said. …

The official government announcement is expected Friday and is being held up because Ottawa has not obtained diplomatic approval or landing rights for the jets in Italy.

“Italy is just waking up and we’re waiting for the OK,” said a senior defence source on background. …

The Canadian jets are being drawn from 425 Squadron and the deployment will involve about 125 members of the air force.

Whether the Canadian aircraft fly with NATO or as part of a broader coalition is still being hammered out, said the sources. With the Arab League’s endorsement of a no-fly zone last week, military planners say there is the distinct a number of non-alliance countries could be involved.  (photo: Reuters)