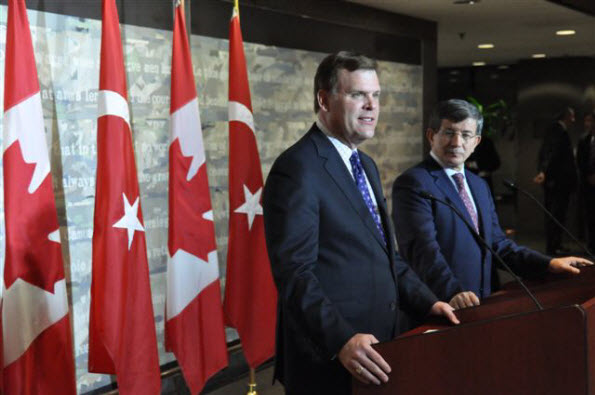 From Paul Wells, Macleans:  In the 17 months since he became Foreign Affairs Minister after the 2011 election, [John] Baird has been working to improve Canada’s relationship with a handful of countries around the world. The list includes Turkey, Indonesia, Nigeria and Vietnam. What the countries have in common is that they are big regional players with bright economic futures that at least balance their woes. In the 1980s, one might have called them “middle powers,” a list that has almost always included Canada. . . .

Suddenly a bunch of countries that function like so many far-flung Canadas are getting a lot of attention. “Minister Baird has made engaging with . . . emerging powers (‘next economies,’ as some call them) a definite priority,” Rick Roth, Baird’s press secretary, told me. “That’s one reason he is visiting Nigeria this week, for instance. . . .

Successive Canadian governments have been frank about using the term “Armenian genocide” in relation to events in 1915. The Harper government has maintained that position since it came to power in 2006. As the Turkish embassy’s website notes, this “creates difficulties in Turkish-Canadian relations.”

But lately, it actually doesn’t. Gulcan Akoguz, the chargé d’affaires at the Turkish embassy in Ottawa, told me Baird’s personal involvement has accelerated a reassertion of normal relations, and more, between the two countries. “Canadian international relations is changing under Minister Baird,” Akoguz said.

There are now direct ﬂights between Ankara and Toronto; flights to Montreal may soon be added. There have been preliminary discussions toward Canada-Turkey free trade, a Turkish consulate in Toronto has opened, and in August Ahmet Davutoglu became the first Turkish foreign minister to visit Ottawa in 14 years. (photo: Canada’s Ministry of Foreign Affairs)  (via Real Clear World)