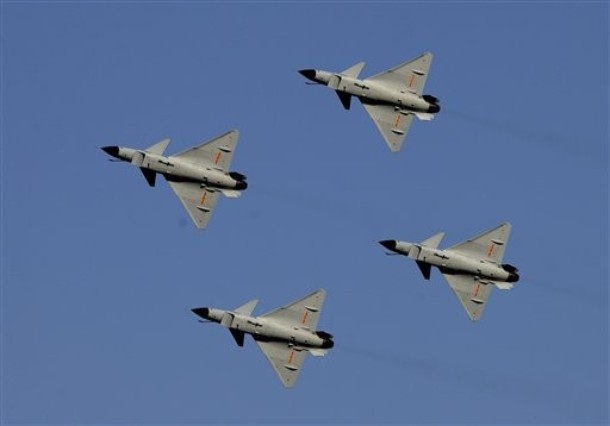 From Martin Sieff, Central Asia Newswire:  The 5,000-troop military exercises in Kazakhstan of the member states of the Shanghai Cooperation Organization (SCO) will wrap up Saturday after significantly advancing China’s ability to project its air power and tactical ground-support beyond its own borders.

These maneuvers were the first of their kind ever carried out by China’s People’s Liberation Army (PLA) Air Force, Major General Meng Guoping, deputy commander of the Chinese forces taking part in the exercises, told Xinhua.

The exercises, therefore, marked a major advance in China’s capacity to project its air power and tactical ground-support beyond its own borders and against potential targets in Central Asia.

Xinhua identified the participating combat aircraft as four H-6H bombers and two J-10 fighter jets. It said they conducted two simultaneous missions and that they enjoyed the support of air early warning aircraft, or AWACs. Their operational range was also effectively doubled because as part of the exercise, they were refueled by an aerial tanker in Chinese air space before flying into Kazakh air space.

Gen. Meng told Xinhua that the express purpose of the exercise was to help the Chinese Air Force create its first integrated air battle group that could carry out and coordinate early warning, command, long-distance bombing, escort and air-refueling functions. …

Russian analysts claim that NATO, the world’s oldest military cooperation organization and the one with the most active members, has so far shunned SCO feelers to carry out joint or cooperative endeavors, especially in the field of combating drug trafficking. The SCO cannot yet begin to match the technological superiority, weapons systems or vast depth in interoperability of NATO member nations.

But as the "Peace Mission 2010" exercises confirmed, its capabilities are impressive and growing. The SCO is here to stay.  (photo: AP)