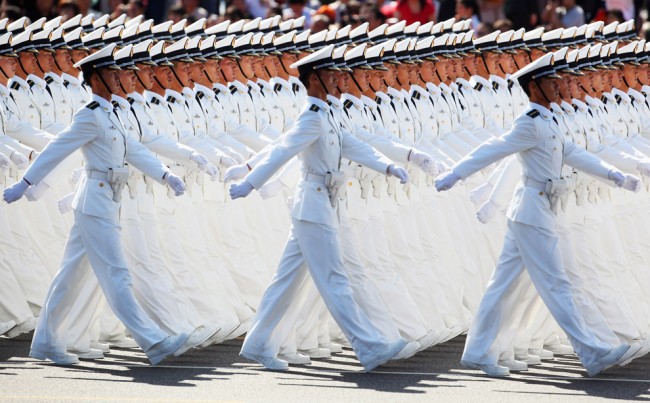 From Peter App, Reuters:  Situated at the northern end of the Suez Canal, the Port Said Container Terminal is one of the busiest in the region, vital for shipments not only to Egypt but also much of Europe and the Middle East.

Like several other key ports in the region – including Piraeus in Greece and Naples in Italy – it is now partially owned by China. The state-owned Cosco Pacific holds 20 percent the terminal, helping make it one of the dominant – if not the dominant – Mediterranean port operators.

Cosco stresses that it is a purely commercial venture and many analysts agree. But few doubt that Beijing has made a wider geopolitical decision to become much more involved in the region.

For the last two years, the People’s Liberation Army Navy has sent one or more warships through the Suez Canal to visit southern European ports, the furthest its fleet has ever operated from home.

But China is not the only great power now increasing its involvement in the area. With Russia sending warships to positions off Syria and the United States signaling it too intends to take the region more seriously, the Mediterranean is clearly no longer seen as the strategic backwater many believed it had become.

"The assumption that the Mediterranean would become a purely Western sphere of influence appears to have been premature," says Nikolas Gvosdev, professor of national security studies at the United States Naval War College in Rhode Island.

"The Chinese are showing their flag in an area far from their traditional area of operations in part to show that they are a global power. The renewed Russian deployments are part intended as a sign that Moscow has not gone away."

Other strategic shifts are also taking place in the region.

The "Arab Spring" has unleashed a period of unrest and instability across North Africa and beyond while the euro zone crisis has left troubled southern European states struggling with debt and searching for ready investment.

Meanwhile, the gas platforms beginning to dot the disputed waters of the eastern Mediterranean have unleashed a scramble for resources that has further exacerbated pre-existing tensions between Cyprus, Turkey and Israel.

The U.S. had hoped it could pull back from the area, helping transfer military resources to the Pacific and South China Sea as part of a pivot to Asia aimed heavily at containing a rising China. But last year’s Libya conflict provided stark warning that European states had distinctly limited capacity, and as the financial crisis bites defense budgets have been further cut.

"I don’t see a conflict," says Gvosdev at the Naval War College. "But… (it) does make it more difficult to do an Asia pivot on the cheap. . . ."

Some European and U.S. security analysts remain nervous over the Chinese expansion – particularly in Naples, where the Chinese-owned terminal directly overlooks NATO’s main Mediterranean naval base. But in Greece, the Chinese investment remains relatively popular. With the purchase of new cranes and other equipment, Cosco has increased container traffic through its terminal by some 70 percent each of the three years of operation.

The vast majority of containers handled by the port are shipped on elsewhere in the world, turning Piraeus into a much more significant international hub.

"This investment has been very important for Greece," says Tassos Vamvakidis, deputy manager of the Cosco-run container terminal. "At a time of economic difficulty, it is very important. . . ."

"There are many good reasons for Beijing to show its flag," wrote [Brussels research fellow,Jonathan] Hoslag in "Global Times", a nationalist tabloid published by the Communist Party mouthpiece the "People’s Daily. "It is better to make countries around the Mediterranean used to Chinese naval presence than to alarm them later on."   (photo: Feng Li/Getty)