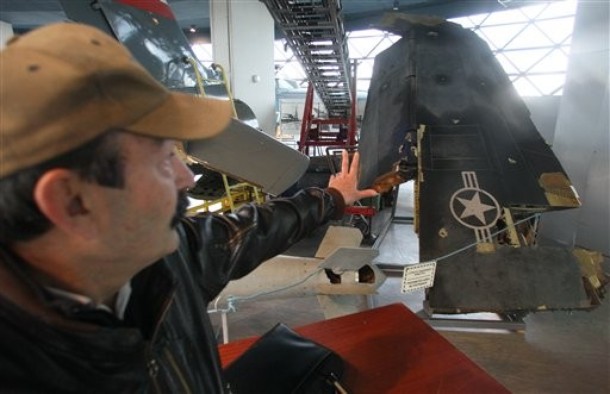 From Slobodan Lekic and Dusan Stojanovic, the AP:  Chinese officials recently unveiled a new, high-tech stealth fighter that could pose a significant threat to American air superiority – and some of its technology, it turns out, may well have come from the U.S. itself.

Balkan military officials and other experts have told The Associated Press that in all probability the Chinese gleaned some of their technological know-how from an American F-117 Nighthawk that was shot down over Serbia in 1999.

Nighthawks were the world’s first stealth fighters, planes that were very hard for radar to detect. But on March 27, 1999, during NATO’s aerial bombing of Serbia in the Kosovo war, a Serbian anti-aircraft missile shot one of the Nighthawks down. The pilot ejected and was rescued. …

"At the time, our intelligence reports told of Chinese agents crisscrossing the region where the F-117 disintegrated, buying up parts of the plane from local farmers," says Adm. Davor Domazet-Loso, Croatia’s military chief of staff during the Kosovo war.

"We believe the Chinese used those materials to gain an insight into secret stealth technologies … and to reverse-engineer them," Domazet-Loso said in a telephone interview.

A senior Serbian military official confirmed that pieces of the wreckage were removed by souvenir collectors, and that some ended up "in the hands of foreign military attaches."

In Washington, an Air Force official said the service was unaware of any connection between the downed F-117 plane and development of Chinese stealth technology for the J-20. The official spoke on condition of anonymity because the subject involves classified information. …

Russia’s Sukhoi T-50 prototype stealth fighter made its maiden flight last year and is due to enter service in about four years. It is likely that the Russians also gleaned knowledge of stealth technology from the downed Nighthawk.  (photo: AP)