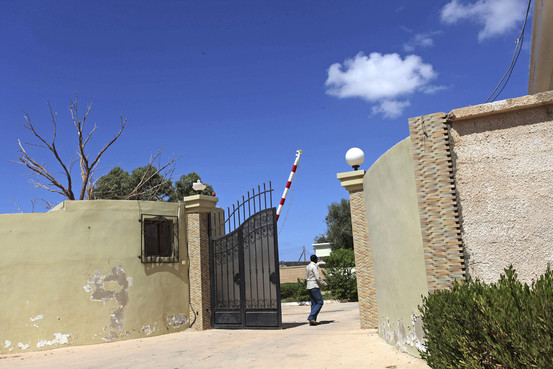 From Eric Schmitt, New York Times:  Security officers from the C.I.A. played a pivotal role in combating militants who attacked the American diplomatic mission in Benghazi, Libya, on Sept. 11 , deploying a rescue party from a secret base in the city, sending reinforcements from Tripoli, and organizing an armed Libyan military convoy to escort the surviving Americans to hastily chartered planes that whisked them out of the country, senior intelligence officials said Thursday.

The account given by the senior officials, who did not want to be identified, provided the most detailed description to date of the C.I.A.’s role in Benghazi, a covert presence that appears to have been much more significant than publicly disclosed. . . .

The senior officials also shed new light on the C.I.A.’s role in Libya.

Within months of the start of the Libyan revolution in February 2011, the agency began building a meaningful but covert presence in Benghazi, a locus of the rebel efforts to oust the government of Col. Muammar el-Qaddafi.

The C.I.A.’s surveillance targets in Benghazi and eastern Libya included Ansar al-Shariah, a militia that some have blamed for the attack on the mission, as well as suspected members of Al Qaeda’s affiliate in North Africa, known as Al Qaeda in the Islamic Maghreb.

From Adam Entous, Siobhan Gorman, and Margaret Coker, Wall Street Journal:  In Libya, the relationship between the State Department and CIA was secret and symbiotic: The consulate provided diplomatic cover for the classified CIA operations. The State Department believed it had a formal agreement with the CIA to provide backup security, although a congressional investigator said it now appears the CIA didn’t have the same understanding about its security responsibilities.

The spy agency was the first to set up shop. It began building up its presence there soon after the Libyan revolution started in February 2011. The uprising overturned what had been a tight working relationship between the Gadhafi regime’s spy services and the Americans, creating a gap that the CIA presence sought to fill, officials said.

The CIA worked from a compound publicly referred to as the "annex," which was given a State Department office name to disguise its purpose. The agency focused on countering proliferation and terrorist threats, said an American security contractor who has worked closely with CIA, the Pentagon and State. A main concern was the spread of weapons and militant influences throughout the region, including in Mali, Somalia and Syria, this person said.

Libyan officials say they were kept in the dark about what the CIA was doing in Benghazi. "The Americans had people coming and going with great frequency. Frankly, our records were never clear [about] who was out there" in Benghazi, said a senior Libyan government official in Tripoli.

In mid-2011, the State Department established its consulate in Benghazi, to have a diplomatic presence in the birthplace of the Libyan revolution. At the annex, many of the analysts and officers had what is referred to in intelligence circles as "light cover," carrying U.S. diplomatic passports.

Protecting the CIA annex was a roughly 10-man security force. The State Department thought it had a formal agreement with the CIA that called for that force to be used in emergencies to bolster security for the consulate. . . .

The CIA abandoned the annex after it had been scrubbed clean of any sensitive materials, according to U.S. and Libyan officials.  (photo: AP)