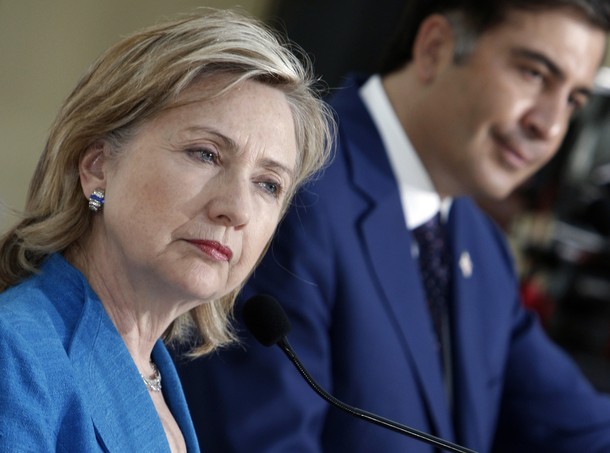 From Hillary Clinton, the State Department:  I came to Georgia with a clear message from President Obama and myself. The United States is steadfast in its commitment to Georgia’s sovereignty and territorial integrity. The United States does not recognize spheres of influence. President Obama and I have also communicated this message directly to our Russian counterparts, most recently during our meetings in Washington on June 24th.

We continue to call for Russia to abide by the August 2008 cease fire commitment signed by President Saakashvili and President Medvedev, including ending the occupation and withdrawing Russian troops from South Ossetia and Abkhazia to their pre-conflict positions. We also stressed the need for humanitarian access to the territories. And we will continue to work toward a peaceful resolution of the conflict through established international mechanisms and constructive non-violent channels. …

We have expressed our concerns about the Russian Government’s construction of permanent military bases. We have made clear that we consider such construction to be in contradiction to Russia’s 2008 cease fire commitments. And we continue to call on Russia to fully comply with the cease fire agreement that they signed, including the withdrawal of their troops to the pre-conflict positions, and humanitarian access to the separatist regions. …

President Saakashvili:  When Secretary Clinton mentions occupation words, it resonates with almost 500,000 people that cannot go back to their houses, not because they are taken by somebody else, but because they are held by occupying troops. But, you know, America was the first one to mention this word. And now the others are following. President Obama was the first one to call a spade a spade, basically, to say it was an invasion. Because before, as you remember, the term "disproportionate use of force" was used, as if there is a proportionate use to, you know, occupy other countries’ territory. President Obama was the first one to use the term.

Putin also suggested Georgia should not look to the United States to solve its problems.

"One shouldn’t seek a solution on the side," he said.  (photo: Reuters)