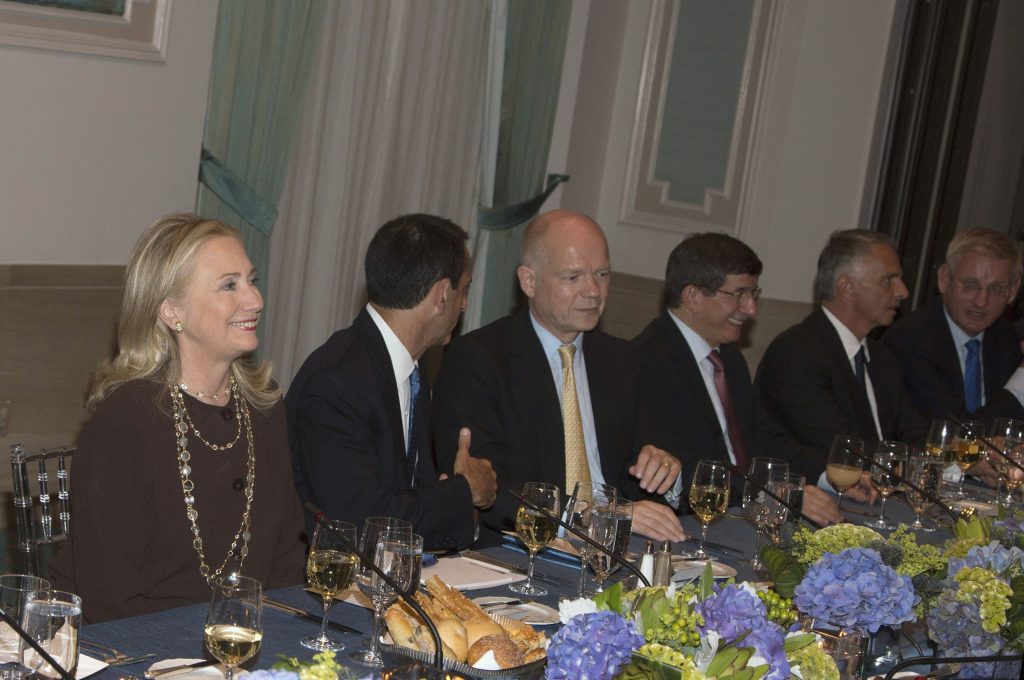 From Department of State: The Transatlantic Dinner, as you all know, is something we do every year at the General Assembly, meeting of European Union foreign ministers, NATO foreign ministers, as well as Macedonia and Switzerland, plus the NATO Secretary General and the High Representative of the EU. And it’s an opportunity to talk about a number of issues on the agenda of European and North Atlantic countries. They can obviously not cover everything; they cover a number of things, but I think particularly worth highlighting would be three topics – Syria, Afghanistan, and Europe and this question of democracy in Europe that I already flagged as being one of the subjects of the bilats.

And I think what is really worth stressing when I mention these topics of Syria, Afghanistan, and democracy in Europe is how much on the same page these members of the transatlantic community are. Members of the EU and NATO are really working in an unprecedented way on each of the topics I mentioned.

Again, just briefly on Syria, there was really a consensus around the table behind the approach that I know you’ve heard about that we’ve been taking in terms of supporting the opposition and trying to coordinate the opposition so that when the Assad regime does fall, as we believe it will, there will be something in place that can provide stability, efforts to respond to the huge humanitarian crisis; of course, Turkey is present at this meeting, was able to speak about the challenges they’re facing with refugees and preparing for a post-Assad Syria and keeping the pressure on the regime.

On Afghanistan, as in previous years, the Secretary was able to thank our European allies and partners for all the contributions they have made to our efforts in Afghanistan. This was the first meeting of this group since the Chicago Summit where important decisions were made on the milestone towards Afghan lead in 2013, and then the full transition by the end of 2014. And to follow up on some of the pledges made, our belief, as you know, is that the key to transition and successful transition in Afghanistan is training, and that requires trainers and it requires funding. And we were very pleased at all of the contributions made by European and other allies in Chicago towards ANSF funding after 2014. And the Secretary reiterated the importance of continuing to finance that project and to contribute the security force assistance teams that are needed to make this a success.

I think it’s worth stressing the Secretary made clear, and I think others around the table also made very clear, that notwithstanding some adjustments to the approach in Afghanistan to deal with these so-called insider attacks, the goal and the strategy and the timeline in Afghanistan remain absolutely unchanged. And Secretary General Rasmussen made that perfectly clear as well. What leaders agreed first in Lisbon and then complemented in Chicago is very clear and has not changed, and again, I can – I think I can say that every single minister on the table who spoke about it reiterated their commitment to the same goal, strategy, and timeline, and their commitment to doing what they can to support those goals.

Finally, and I think it’s really worth stressing, the discussion on democracy in Europe was important. This group gets together, and the world in which we live so often finds itself talking about Libya or Syria or Iran or Afghanistan, but there’s still some concerns in Europe to this group. And the Secretary herself highlighted her personal concerns about some of the upcoming elections that I already mentioned – Ukraine and Georgia, the highly imperfect election that took place in Belarus, and also the climate for democracy and human rights in Russia. And the Secretary noted a number of steps taken recently in Russia that aren’t pointing in the right direction where transparency and democracy are concerned.

And we’ve already raised in other fora our concerns about the new NGO law that requires registration of foreign agents, the increased fines for protests, some selective cases of prosecution, and now most recently, a new draft law on treason which would widen the definition of treason, and then of course the Russian decision to ask our USAID Office to cease its activities in Russia. And the Secretary reiterated our regret of that decision and our belief that USAID has accomplished a lot in Russia, and our commitment to carry on as we can in supporting those in Russia who want to see a free and fair and democratic Russia.

From Carl Bildt, Foreign Minister of Sweden, @carldbildt: Slightly emotional ending to last transatlantic dinner hosted by Hillary Clinton. Fair to say that she will be missed by all of us.