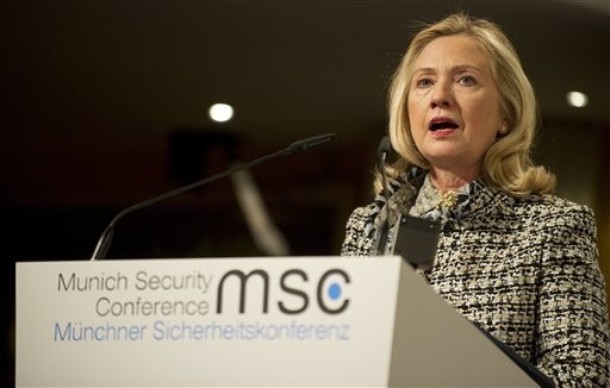 From Hillary Clinton, Department of State:  I have heard all the talk about where Europe fits in to America’s global outlook. And I have heard some of the doubts expressed. But the reality couldn’t be clearer. Europe is and remains America’s partner of first resort. I have now traveled to Europe 27 times as Secretary of State. President Obama has visited 10 times. And wherever America is working to prevent the spread of nuclear weapons, to fight disease, to help nations on the difficult journey from dictatorship to democracy, we are side by side with our friends in Europe.

In fact, I would argue the transatlantic community has never been more closely aligned in confronting the challenges of a complex, dangerous, and fast-changing world. The breadth and depth of our cooperation is remarkable. You know the litany. In Libya, NATO allies came together with Arab and other partners to prevent a catastrophe and to support the Libyan people. In Afghanistan, with nearly 40,000 European troops on the ground alongside our own, we have built and sustained NATO’s largest-ever overseas deployment. And we will continue to support the Afghans as they assume full responsibility for their own security by the end of 2014. . . .

Today’s transatlantic community is not just a defining achievement of the century behind us. It is indispensable to the world we hope to build together in the century ahead. Here in Munich, it is not enough to reaffirm old commitments. The world around us is fast transforming, and America and Europe need a forward-leaning agenda to deal with the challenges we face. Let me just briefly discuss five areas in particular that will require a greater collective effort.

First, we have to finish the business our predecessors started, and build a Europe that is secure, united, and democratic. And we heard the ICI Report that sets forward some very specific steps we could take together. From day one of this Administration, we have worked closely together to transform strategic relations with Russia, while standing firmly behind both our principles and our friends. This approach has yielded results, but we need work to sustain it. And this is not the only place in our community where we need to overcome mistrust. As long as important conflicts remain unresolved in Eastern Europe, the Balkans, the Caucasus, and the Mediterranean, Europe remains incomplete and insecure. Even as we grapple with a wider global agenda, we cannot lose sight of the challenges closer to home. . . .

Second, because the strength of our alliance depends on the health of our economies, security and prosperity are ultimately inseparable. That means we need a common agenda for economic recovery and growth that is every bit as compelling as our global security cooperation. We recognize that Europe’s most urgent economic priority is the ongoing financial crisis. As you probably know, we have been dealing with one of our own. And although we get good news from time to time, as we did yesterday with jobs figures and drops in unemployment, we know we have a ways to go, as well. We remain confident that Europe has the will and the means not only to cut your debt and build the necessary firewalls, but also to create growth, to restore liquidity and market confidence. . . .

Third, in a time of tight budgets we need to ensure that our security alliance is agile and efficient, as well as strong. That is what Secretary General Rasmussen calls "smart defense": Joint deployment of missile defenses, the commonly-funded Alliance Ground Surveillance program, Baltic air policing, and a reinvigorated NATO response force. These are practical ways to provide security while minimizing cost to any one nation.

We also need to build our capacity to work with partners such as Sweden, Japan, Australia, members of the Arab League, and many others. And this will be a focus of our efforts in Chicago to ensure that NATO remains the hub of a global security network with a group of willing and able nations working side-by-side with us.

Fourth, our shared values are the bedrock of our community. We need to vigorously promote these together around the world, especially in this time of transformational political change. In the Middle East we have a profound shared stake in promoting successful transitions to stable democracies. We are making the Deauville Partnership a priority during America’s G8 presidency this year. And to make good on its promise, we will be putting forward an ambitious agenda to promote political and economic reform, trade, investment, regional integration, and entrepreneurship to help people realize the better future they have risked so much to have. . . .

Fifth and finally, we have to reach out to emerging powers and regions. The world we have worked together to build is changing. There are new centers of wealth and power, and fewer problems can be addressed decisively by America and Europe alone. So we have a challenge to make the most of this critical window of opportunity, to enlist emerging powers as partners, and strengthening a global architecture of cooperation that benefits us all.

I am glad that Europe’s engagement in the Asia Pacific is on the agenda here in Munich, because we need to reach out together to regions already playing a growing role in world affairs. Now, a great deal has been said about the importance of a rising Asia Pacific for the United States. But not nearly enough has been said about its importance for Europe. America and Europe need a robust dialogue about the opportunities that lie ahead in the Pacific-Asia region. And we are building one here today. Taken together, all of these elements point to a larger enduring truth: When Americans envision the future, we see Europeans as our essential partners. There is no greater sign of our confidence and commitment than just how much we hope and need to accomplish with you.

We have not sustained the most powerful alliance in history by resting on our laurels. Our predecessors planned for the future together. They acted on the belief that America, Europe, and like-minded nations everywhere are engaged in a single common endeavor to build a more peaceful, prosperous, secure world. That is as true today as it ever was. And in this time of momentous change, let us have that same spirit guide us as we chart our path forward together.