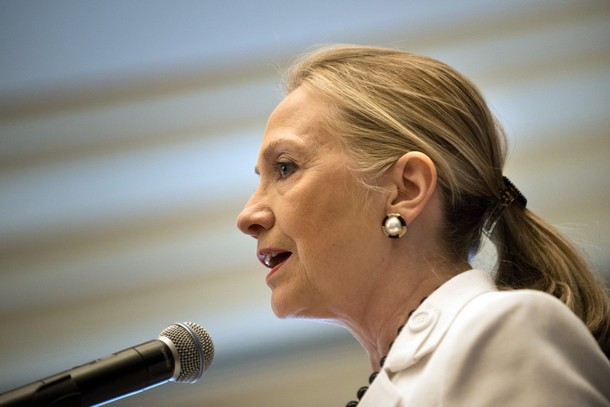 QUESTION: When you leave office in January, if Assad is still in power, will you walk away believing that this was the right strategy, to stay the course with this?

SECRETARY CLINTON: Well, I don’t know what other strategy anybody is suggesting, because unless you have Security Council support for any other action, I don’t think any country believes that it should act unilaterally in such a complex, dangerous situation. Certainly the countries along the border of Syria that stand to be affected by any spillover of violence are extremely worried about any unilateral kind of action.

So I know people share my deep frustration and outrage at what’s going on inside Syria, but my job is not just to express outrage. My job is to try to figure out what can be done that would be effective. And sometimes a situation does not lend itself to an answer that is immediately satisfying. That’s just the way diplomacy and life happen to be. So I’m very confident we’ve done everything we can do and will continue to do everything possible to try to bring this terrible situation to as early an end as possible.

QUESTION: Can you give me a sense of what the effect of what’s going on in Syria has been on the surrounding countries? I mean, how much is it shaking stability here? And what is Iran’s role?

SECRETARY CLINTON: Well, Iran is playing a major role. We often talk about wanting to get Russia and China on board because they’re permanent members of the Security Council. But the real player supporting Syria is Iran and their proxy, Hezbollah. They’re the ones who are, day in and day out, providing cover, support, financing, weapons, military advice to Assad, to the army, to the regime. And it’s just another example of the malicious role that Iran plays in the world, promoting terrorism, destabilizing its neighbors, pursuing nuclear enrichment, with the likelihood that it could be moved to have a nuclear weapon unless they are stopped. So Iran plays a very malign role. There’s no doubt about that.

And that, of course, adds to the effects of the violence. We’ve seen Turkey have some difficult situations on their border. They have received thousands of refugees. Jordan has received tens of thousands of refugees. So has Lebanon. You look at the region and beyond, it could be quite destabilizing. So far, the effects have been somewhat contained, but it’s another reason why you don’t want to spread the violence and the conflict, because there’s no way to keep it contained within the borders of Syria.  (photo: AP)