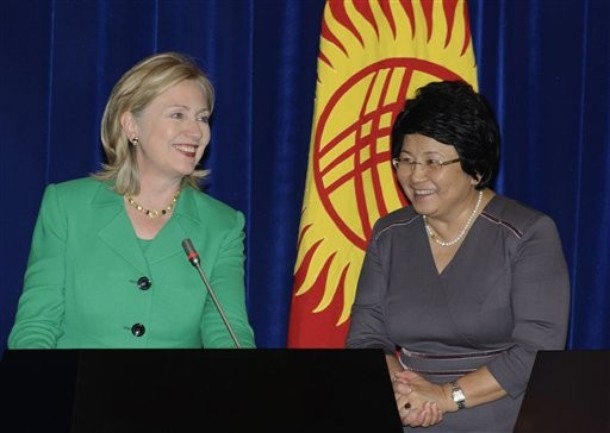 From Mark Landler, the New York Times:  Hoping to defuse the latest round of tensions over a strategically important American air base, Secretary of State Hillary Rodham Clinton said Thursday that the United States would steer part of a lucrative Pentagon jet fuel contract to a newly created Kyrgyz state-owned corporation.

The Pentagon had previously awarded the $315 million contract to a pair of secretive companies controlled by an American investor and said to be linked to the son of a former Kyrgyz leader, Kurmanbek Bakiyev, who was ousted in April amid accusations of corruption.

Mrs. Clinton made the announcement after meeting Kyrgyzstan’s president, Roza Otunbayeva, who assumed the leadership after Mr. Bakiyev’s ouster and who had pushed for the United States to add a locally owned supplier to the fuel contract.

The Manas air base has become the key transit center for American and allied troops deployed to Afghanistan. Mr. Bakiyev used his country’s role as the base’s host as a bargaining chip to win concessions and payments from both the United States and Russia, which jealously guards its influence in Central Asia. …

While the details of the deal were not yet clear, the new state-owned corporation would, over time, take a significant chunk of the fuel-supply business, an American official said. The two companies that now hold the contract, Mina Corporation and Red Star Enterprises, are registered in Gibraltar. Some critics of Mr. Bakiyev’s have linked the companies to Maksim Bakiyev, his son; they deny any connection.  (photo: AP)