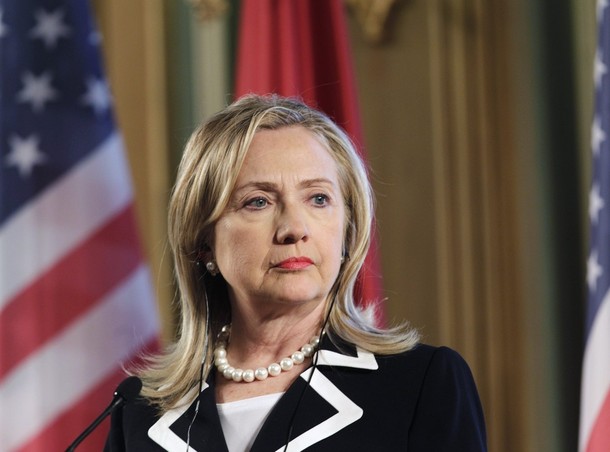 From Elise Labott, CNN Security Clearance:  U.S. Secretary of State Hillary Clinton lambasted Russia and China on Friday for blocking efforts to topple Syrian President Bashar al-Assad , whose much-reviled regime has endured a serious crack in its armor – the defection of a key member of its inner circle.

Speaking at the Friends of Syria conference in Paris, Clinton called on Russia and China to "get off the sidelines" and accused them of "standing up for" al-Assad’s regime. She urged the other 60 or so nations represented at the summit to "make it clear that Russia and China will pay a price" for that support.

"I ask you to reach out to Russia and China and not only ask but demand that they get off the sidelines," she said. "I don’t think Russia and China believe they are paying any price at all, nothing at all, for standing with (the) Assad regime."

But it was unclear whether those two nations will reverse their longstanding opposition to forcing al-Assad from power. The two trade partners of Syria have vetoed previous efforts by the U.N. Security Council to condemn the violence in Syria and oust al-Assad. Neither Russia nor China was represented at the Paris meeting.

Western and Arab nations started the Friends of Syria initiative because both countries posed diplomatic obstacles in tackling the Syrian crisis. The United States and others hope this meeting of the group could lead to stricter economic sanctions and more support for the opposition. . . .

The Syrian leader’s "currency and foreign reserves have collapsed," she [Clinton] said, curbing his ability to continue his crackdown.

But she said challenges remain. Al-Assad was being kept afloat by "money from Iran and assistance from Russia and the failure of countries here" at the conference to tighten economic sanctions.

"None of us is satisfied or comfortable with what is going on in Syria," she said.

But she noted that in the last several months since the Friends of Syria met in Tunis in February, "there has been a steady march toward ending this regime. . . ."

Senior U.S. officials said the United States and its European and Arab partners will move to impose global sanctions if Syria doesn’t quickly implement the transition plan that includes the appointment of a new government.

Diplomats at the United Nations are already working on a document that would demand restrictions on oil and other commercial business with the Syrian regime if it refuses to implement the Annan peace plan for a cease-fire and a transitional government. A Security Council resolution under Chapter 7 of the U.N. Charter could be introduced next week, the officials said.

Chapter 7 could ultimately authorize the use of force.  (photo: Reuters)