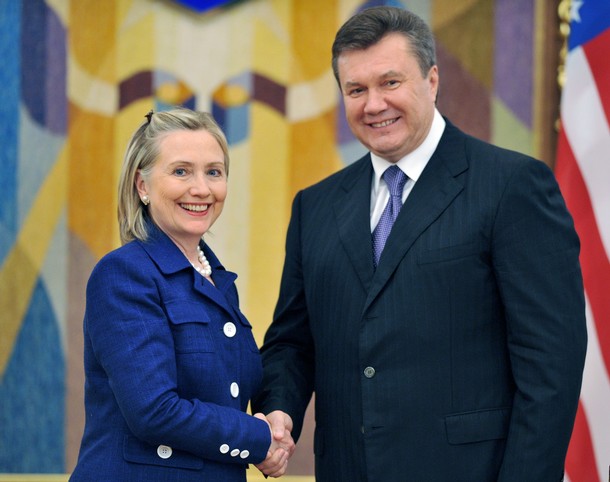 From Hillary Clinton, the State Department:  I think what Ukraine is doing in trying to balance its relationships between the United States, the European Union and Russia makes a lot of sense. Because what you want is to protect your territorial integrity, your sovereignty, and your independence, but to cooperate where you can with not only your neighbors, but the European Union members as well as in a Euro-Atlantic context.

So the United States has supported Ukraine’s desire to achieve that balance and we are very pleased that Ukraine has agreed to joint U.S.-Ukraine military exercises at the end of this month and that Ukraine continues to send peacekeepers on NATO missions including into Afghanistan because we think this balance that Ukraine is constructing with its very strategic location is in Ukraine’s long-term interests and will assist in creating a better atmosphere for relations between and among Russia, Europe, and the United States. …

NATO is a membership organization that people apply to join. Countries apply to join. It’s always been the United States’ position that NATO is open to countries that wish to make an application. Ukraine, at this time, has apparently decided that it is not going to pursue an application to NATO and is not going to join the Collective Security Treaty Organization either, that it is going to, as it says, remain non-bloc or independent. That’s Ukraine’s decision. The doors to NATO remain open, but our point regarding Ukraine was that it should be up to Ukrainians to decide that no other country should have the right to veto the Ukrainian decision. And so if Ukraine decides, at this time, it’s not interested in joining, we respect that. If it decides later that it wishes to, it would be welcome to submit an application. So I think the important point is that it should be Ukraine’s decision and I respect that.