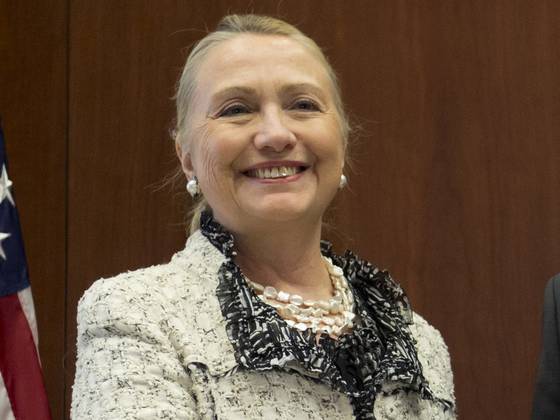 From Hillary Rodham Clinton, Department of State:  The United States shares with the European Union a vision of a peaceful, stable, prosperous Bosnia-Herzegovina that is fully integrated into the Euro-Atlantic institutions. We believe that joining the European Union and NATO offers this country, especially the young people of this country, the best path to lasting stability and prosperity. We have no doubt that Bosnia-Herzegovina belongs in Europe. And we also believe strongly that the young people, some of whom I was privileged to meet with two years ago, deserve that kind of future.

Now since my visit in 2010, there has been some progress toward these goals. Last month’s local elections showed the strength of the people’s commitment to their own future. Free and fair elections, including voting rights for internally displaced people and returnees, are a key element of Bosnia-Herzegovina’s future as a member of the EU and of the Euro-Atlantic Alliance.

We are here today to urge that all of the leaders of this country find common ground and act in the interests of the people. Obstacles that the country faced when I was last here still remain. Key reforms have not yet been made. Party differences stand in the way of shared progress. Now, as I know very well, coming from a political background in the United States, political compromise is rarely easy, but it is absolutely necessary. And so we hope that that compromise, which demonstrates brave and courageous leadership, can be made in order to move the country forward. . . .

[W]e call on all, particularly the people, to demonstrate your commitment to tolerance, diversity, and inclusiveness. That is the path to a multiethnic, democratic Bosnia-Herzegovina that is a member of the European Union, a member of NATO, a part of Europe that is whole, democratic, and free. That is the future that we know the people of this country want, and the United States will continue to work with you to achieve it. . . .

I can speak on behalf of NATO and can reiterate what the President said. There was an agreement last March about a way forward that would give you MAP, the action plan for membership. The constitutional court has clarified any remaining legal doubt about how to resolve the state property issue. Therefore, if there can be final decision coming out of the presidency in November, I will personally go to the NATO Ministerial in Brussels in December to push for MAP to be given to you.

We also strongly support the EU roadmap that Cathy Ashton has spoken to. So there is absolute unity in our goals. We want to see you in NATO, and we want to see you in the EU. But we have been – I will be honest with you – frustrated that your leadership has not, fairly, in our view, reflected the aspirations of the great majority of your people to move quickly toward NATO and EU. . . .

But we’re here today with an unequivocal strong message: We are united in our goals to see you in NATO and EU as quickly as you possibly can, and we worry that if you do not make progress, you will be left behind in the rest of the region. We leave here and go to Belgrade. Belgrade is on the path for Serbia to become a member of the EU. We will then go to Pristina. Kosovo is on the path for a lot of positive changes. You’ve already seen Croatia go into the EU. You’ve got other neighbors who are making progress. This country has more potential than anyone if you will do what is necessary.