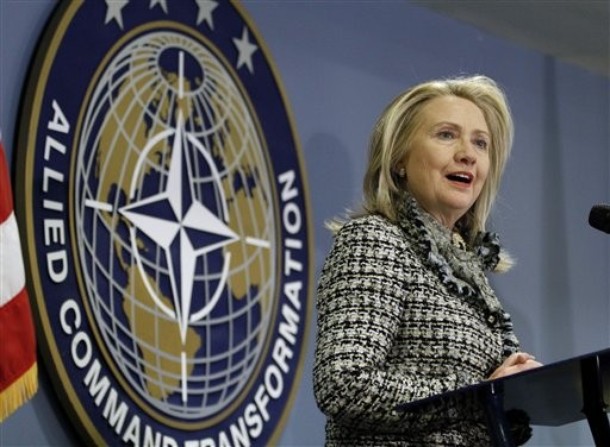 From the Department of State:  Excerpts from remarks by Secretary of State Hillary Clinton to the World Affairs Council 2012 NATO Conference

This alliance is no stranger to change. Fifty years ago, it was created to lay that foundation for the reemergence of Western Europe and to stand as a bulwark against Soviet aggression.

After the Cold War, NATO’s mission evolved to reforming and integrating Central and Eastern Europe as they rose from decades of Communism. Then two years ago in Lisbon, the leaders of NATO set another new course for our alliance by adopting a strategic concept that takes on the security threats of the 21st century from terrorism to cyber attacks to nuclear proliferation. Next month, we will take another step in this evolution when President Obama hosts the NATO Summit in Chicago. Now, we are both eager to show off Chicago – I was born there, and he of course calls it home, and we’re looking forward to making concrete progress on a number of important issues.

First, is the ongoing transition in Afghanistan. . . .

In Lisbon, we set a goal of transitioning full responsibility for security to Afghan security forces by 2014, and they’re making real progress toward that goal. Al-Qaida senior leadership has been decimated and its relationship with the Taliban is fraying.

Meanwhile, the Afghan National Security Forces are becoming stronger and more capable. Today, roughly 50 percent of the Afghan population lives in an area where they are taking responsibility for security. And this spring, the number will go up to 75 percent.

Now, I’m well-aware we’ve had a very difficult period in that relationship. And there is certainly a lot to be learned from the incidents that we have watched unfold. But it should not (inaudible) the fact that we have made progress and are continuing to do so. In Chicago, we will work to define the next phase in this transition, in particular, we will look to set a milestone for 2013, when ISAF will move from a predominantly combat role to a supporting role, training, advising and assisting the Afghan National Security Forces while participating in combat operations when necessary.

This milestone is consistent with the commitments we made in Lisbon because it will ensure that ISAF maintain a robust troop presence and combat capability to support the Afghan people as the transition completes. By the end of 2014, Afghans will be fully responsible. In Chicago we will discuss the form that NATO’s enduring relationship with Afghanistan will then take. We also hope that, by the time we meet in Chicago, the United States will have concluded our negotiations with Afghanistan on a long-term strategic partnership between our two nations. We anticipate that a small number of forces will remain, at the invitation of the Afghan Government, for the sole purpose of training, advising, and assisting Afghan forces and continuing to pursue counterterrorism operations. But we do not seek permanent American military bases in Afghanistan or a presence that is considered a threat to the neighbors, which leads to instability that threatens the gains that have been made in Afghanistan. . . .

Our second goal in Chicago touches on a subject that is at the center of ACT’s work, our shared effort to update NATO’s defense capabilities for the 21st century. . . .  So in Chicago, we will outline a clear vision of how NATO will maintain the capabilities we need in line with the resources we have. This approach works hand-in-hand with Secretary General Rasmussen’s concept of smart defense, which is designed to make sure our alliance remains agile and efficient as well as strong. And I appreciate the work that has been done from ACT in building political support throughout NATO for this innovative approach.

Here’s an example of how it works in practice. We are collaborating on a new Alliance Ground Surveillance system, which uses drones to provide crucial intelligence, surveillance, and reconnaissance information to our forces. If each country in NATO had to buy this system separately, it would be prohibitively expensive. But by pooling our resources and sharing the burden, we can provide better security for every ally at a lower cost. And in Chicago, we’ll decide how to use this system as a hub for joint operations.

There are other ways we will look to strengthen our work together. In Lisbon, for example, we agreed to deploy a missile defense system to provide full coverage and protection for NATO European territory, population, and forces against the growing ballistic missile threat. In Chicago, we will look to advance that goal by developing our plans for NATO to exercise command and control of missile defense assets. We will also seek a commitment to joint exercises and training programs that deepen the habits of cooperation we have developed through our work together in Afghanistan. And we will highlight NATO’s decision to extend the Baltic Air Policing Program, which reassures our Baltic allies and frees up resources they can contribute to other NATO efforts, including Afghanistan.

Finally, our third goal in Chicago will be to cement and expand our global partnerships. Now of course, NATO is and always will be a transatlantic organization, but the problems we face today are not limited to one ocean, and neither can our work be. More than 20 non-NATO countries are providing troops and resources in Afghanistan. Elsewhere, we work with non-NATO partners to fight piracy, counter violent extremism, keep peace in Kosovo. And when NATO moved to enforce U.N. Security Council resolutions on the protection of civilians in Libya, it did so in lockstep with non-NATO partners from Europe and the Middle East.

And let me pause here for a moment to celebrate the role so many of you at ACT played in that effort. Operation Unified Protector was a massive and complex undertaking. It succeeded because our allies and partners collaborated smoothly, and that cooperation was made possible by the training and interoperability planning that you do here. It’s no exaggeration to say that thousands of Libyans are alive today because of your work. . . .

Now, the three areas I’ve outlined today – defining the next phase of the transition in Afghanistan, outlining a vision for addressing 21st century challenges in a period of austerity, and expanding our partnerships – shows just how much NATO has evolved over the past six decades. But they should also remind us that we must continue to evolve. Transforming any institution isn’t easy, and it doesn’t happen overnight. In fact, it is a project that never really ends. But we have strong leaders and the right strategies in place. And everything we have accomplished so far points toward how much we can achieve in the days and years to come. If we stay nimble and work together, we can continue to make the world more peaceful and secure.  (photo: AP)