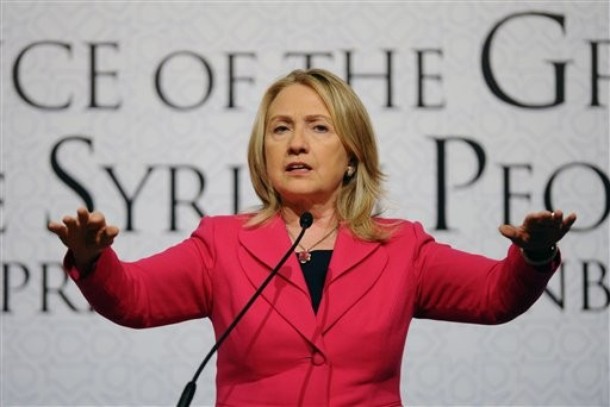 From the US Department of State:  Excerpts from interview of Secretary of State Hillary Rodham Clinton by Wendell Goler, FOX News

SECRETARY CLINTON: Well, we are going to be providing what you might call technical or logistical equipment – not arms, not military equipment, but communications equipment. We’ve learned that there’s a great deal of difficulty for the opposition to communicate with one another inside Syria, and from inside to outside to their counterparts who are along the border of Turkey or elsewhere. That will facilitate the safety as well as the movements of the people who are on the inside.

We have some intelligence capacity that we might be able to usefully offer. Now other countries are going to choose to provide different kinds of aid. Today, a group of countries announced that they were going to be funding some of the Free Syrian Army. That’s their choice, but what we think is appropriate for us is to try to facilitate the ability to communicate and to be protected and to know what is happening inside Syria to minimize civilian casualties.

QUESTION: On providing money to basically try and encourage members of the Syrian army to defect, that seems very close to arming the opposition, something the United States didn’t want to do for fear of raising the number of civilian casualties.

QUESTION: Why is it better to encourage defection? It seems like it’s another increase in violence.

SECRETARY CLINTON: Well, I think what you’ll find is that many thousands – the numbers vary, some it’s from, like, 10,000 to 40,000 of the soldiers have defected. If you really study the Syrian military movements, they have five brigades. They use two of them because they can’t trust the other three of them. And there have been a number of defections at senior officer levels, generals and colonels, many of whom are now across the border in Turkey kind of setting up headquarters.

So clearly, there needs to be a greater reassurance to those soldiers who defect that if they take their weapons and turn them against the military that continues to ruthlessly assault civilian targets, they’re going to – their family is going to be provided for, there is some safety net for them. I think that’s a sensible approach for those countries that are willing to do that.  (photo: AP)  (via @SlaughterAM)